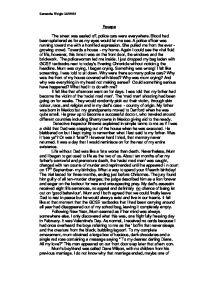 Escape - The street was sealed off, police cars were everywhere.

Escape The street was sealed off, police cars were everywhere. Blood had been splattered as far as my eyes would let me see. A police officer was running toward me with a horrified expression. She pulled me from the ever-growing crowd. Towards a house - my home. Again I could see the vital fluid of life, however, this time it was on the front door, the windows and the brickwork. The policewoman led me inside. I just dropped my bag laden with GCSE textbooks next to today's Evening Chronicle without noticing the headline. Mum was crying, I began crying. Something was wrong! I felt like screaming. I was told to sit down. Why were there so many police cars? Why was the front of my house covered with blood? Why was mum crying? And why was everything in my head not making sense? Could something serious have happened? What had it to do with me? It felt like that afternoon went on for days. I was told that my father had become the victim of the 'racist mad man'. The 'mad man' shooting had been going on for weeks. They would randomly pick out their victim, through skin colour, race, and religion and in my dad's case - country of origin. My father was born in Mexico but my grandparents moved to Dartford when he was quite small. He grew up to become a successful doctor, who traveled around different countries including Shantytowns in Mexico giving aid to the needy. Detective Inspector Browne explained in simple terms to me as if I was a child that Dad was stepping out of the house when he was executed. ...read more.

I could tell by Mum's expressions that she was ecstatic, reminding me of a newly decorated room with the sunlight boomeranging of the freshly hung wallpaper. After the honeymoon, everything went downhill. Mum was always stressed, Dave was never at home and I was left to do all of the housework, cook the tea and get the best possible grades in my GCSEs that I could. What was I? Cinderella or something! The day that most stands out was the day when Dave came home in a very bad mood. He was just like the eye of a tornado, destroying everything that was in his way. His company had lost a major contract, which was worth billions. As normal, I gave him, the evening paper and a large beer. He grunted as he excepted them. I went upstairs to finish my GCES English creative writing coursework, when Dave hollered for me. I turned off my CD player and went down. He grabbed me by my left ear, causing it to go as red as a lobster that had just been cooked and threw me across the room literally. From there, he punched, kicked and shouted abuse at me. This went on for what felt like hours. I could not scream, his hands were on my mouth and around my neck. I kicked and punched him in retaliation, finally managing to break free. This went on for months, every time that I told Mum what Dave was doing to me, she just told me to stop being; "a childish, selfish, spoilt brat. Get used to having Dave in your life as he is my husband and there is nothing that you can do!" It was like she was oblivious to everything that was happening. ...read more.

I did not want to end up like the children in "Bedknobs and Broomsticks" and "Oliver". An hour before the social worker arrived, Dave confused everything to Mum and gave her an ultimatum: Him or me. Lucky for me and unluckily for Dave, Mum chose me. She said that she would rather be a single parent than be childless. Unaware to Dave, whilst Mum was making up her mind to the ultimatum, I had rung the police, telling them that Dave had just confused everything to Mum and I had caught everything said on a Dictaphone that could be used as evidence in court. Dave was sentenced to 10 years in jail, with the judge calling him a bad-tempered man who was allergic to children which lead to his obsession of abusing them until they were so badly hurt that they would give to the fight to live. It had been revealed that in Dave's previous marriage, he had had a daughter, (who would have been about 5 years older than me), whom he severely abused, leading into her committing suicide. In my opinion he was like the greyhounds chasing down the poor, defenceless rabbit in a race that had done nothing to them. Everything went back to normal after Dave went to jail. My grades improved leading to me receiving 1 A*, 6 As and 5 Bs in my GCSEs. This lead to Mum taking me to New York of a week on a massive shopping spree, which had be wonderful. After I finished in Year 11, Mum and I moved to Lancashire were hopefully, nothing like this would ever happen again. However I had feeling that something suspicious was going to happen! Samantha Wright 26/09/03 ...read more.