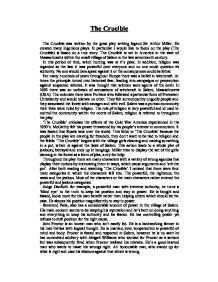 Essay on 'The Crucible'

The Crucible The Crucible was written by the great play writing legend Sir Arthur Miller. He created many ingenious plays. In particular I would like to focus on the play (The Crucible) is based on a true story. The Crucible is set in America in the state of Massachusetts within the small village of Salem in the late seventeenth century. In this period of time, witch hunting was at it's peak. In addition, religion was regarded as the law it was powerful over everyone and no one could question its authority. No one would dare speak against it or the consequences could be lethal. For many hundreds of years throughout Europe there was a belief in witchcraft. At times the principle turned into historical fear, leading into campaigns or persecution against suspected witches. It was thought that witches were agents of the devil. In 1692 there was an outbreak of accusations of witchcraft in Salem, Massachusetts (USA). The colonists there were Puritans who followed a particular form of Protestant Christianity and would tolerate no other. They felt surrounded by ungodly people and they associated the forest with savages and with evil. ...read more.

The court believes that she was reading them books to learn how to curse people. Francis Nurse testifies and defends his wife, Judge Hathorne supposes they are the bad ones and is angered by their blatant denial so consequently orders Corey and Nurse to be arrested. Proctor forces Mary Warren to testify for the defence and she complies by saying she lied in the court before. John says the girls are lying about the witchcraft. This makes the judges very nervous because if Proctor is correct then they have killed many innocent people. Proctor presents his case, he has three depositions to offer for evidence, the first being a signed petition proving the innocence of the three men's wives. The second statement comes from Giles Corey, he tells the judges that Thomas Putnam is a ravenous and greedy man who is obsessed with attaining land through any means. However, Putnam denies this and Corey refuses to tell the court who gave him this information on Putnam in fear of being arrested. Unfortunately, he is still arrested for contempt of court. From here we are taken back to Rev. Hale who has realised his mistake and has changed sides, now supporting Proctor. ...read more.

The people in this play may have had different motives for accusing other people, and practically sentencing them to death, but the outcome of all accusations was more or less the same. Innocent people died and there was more than one person to lay the blame on. In almost every conflict, there is someone or some people to hold responsible. In this case, it was Abigail for her manipulative nature, the Putnam's for their greed, Mary Warren for being weak-willed and Rev. Parris for craving power. It makes one wonder how such a diminutive act of young girls could lead to such destruction of a community. How could innocent people be sentenced to death simply because some girls were playing and dancing? This is the power of religion and the annihilation it can cause if people refuse to tolerate any other explanation and follow it blindly. 'The Crucible' is a magnificent play, superbly written conveying one simple message. It is better stand for the truth and sacrifice yourself than to live with a lie. It reminds us that man is not perfect, and that we can make mistakes. However, even with these mistakes, we can cleanse ourselves and purify ourselves by making what is wrong right. ?? ?? ?? ?? ...read more.