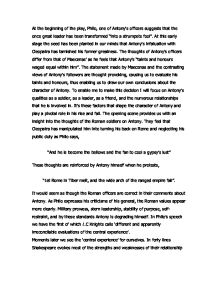 Evaluate his taints and honours, thus enabling us to draw our own conclusions about the character of Antony.

At the beginning of the play, Philo, one of Antony's officers suggests that the once great leader has been transformed "into a strumpets fool". At this early stage the seed has been planted in our minds that Antony's infatuation with Cleopatra has tarnished his former greatness. The thoughts of Antony's officers differ from that of Maecenas' as he feels that Antony's "taints and honours waged equal within him". The statement made by Maecenas and the contrasting views of Antony's followers are thought provoking, causing us to evaluate his taints and honours, thus enabling us to draw our own conclusions about the character of Antony. To enable me to make this decision I will focus on Antony's qualities as a soldier, as a leader, as a friend, and the numerous relationships that he is involved in. It's these factors that shape the character of Antony and play a pivotal role in his rise and fall. The opening scene provides us with an insight into the thoughts of the Roman soldiers on Antony. They feel that Cleopatra has manipulated him into turning his back on Rome and neglecting his public duty as Philo says, "And he is become the bellows and the fan to cool a gypsy's l**t" These thoughts are reinforced by Antony himself when he protests, "Let Rome in Tiber melt, and the wide arch of the ranged empire fall". It would seem as though the Roman officers are correct in their comments about Antony. As Philo expresses his criticisms of his general, the Roman values appear more clearly. Military prowess, stern leadership, stability of purpose, self-restraint, and by these standards Antony is degrading himself. ...read more.

During the play we are reminded of Antony's qualities as a soldier and as a leader. Evidence of this is delivered by an unlikely source in Pompey, when in a conversation with Menas he claims that, "his soldier ship is twice that of the other twain". Caesar also echoes these thoughts in a rousing speech in an attempt to lure Antony away from his playboy lifestyle in Egypt by saying, "Thou didst drink The stale of horses and the gilded puddle Which beasts would cough at". This compliment is emphasised by Antony himself when his army defeats Caesar towards the end of the play. Even though his army won that battle we cannot jump to the conclusion that Antony was a competent leader or tactician. We have already seen the evidence of this at the battle of Actium when he ignores the advice of his men, and forces them to fight at sea, knowing they were unprepared. A short time later we see that Antony's qualities, as a tactician do not match his other soldierly virtues as he leads his army into yet another sea battle against Caesar, Antony says, "Their preparations are today by sea, we please them not by land". His army surrenders and is defeated by Caesar due to Antony's impulsive attitude. At this point Antony seems to have fallen apart. He fails to exhibit the character of a Roman leader when he says, "I have lost my way forever". This loss of identity is mirrored by the protagonist in King Lear when he asks, "Doth anyone know me" and "Who is it that can tell me who I am". ...read more.

It is this reference to his sword, which is a final reflection of the power that Antony once held, and is now in the possession of Caesar. He has now gained all the power and overtaken Antony's once great stature. The critic A.C Bradley believes that Antony was not to blame for his downfall when he says, "We sympathise warmly with Antony,are greatly drawn to him and are inclined to regard him as a noble nature, half spoiled by his time". A.C Bradley's idea of Antony is misguided and incorrect. With that in mind I feel I have to disagree with the statement made by Maecenas. I believe that Antony's taints outweighed his honours considerably. The once great leader showed a complete lack of judgement on the battlefield and in his private life. After all, it was this lack of judgement that led him to believe that Cleopatra was in league with Caesar and therefore decides to take his own life. In Romeo and Juliet, Hamlet and Othello we accept the deaths of the hero, and we feel a keen sorrow, but in Antony's case we can hardly do this. It was A.C Bradley's view that, "It was better for the worlds sake, and not less for his own that he (Antony) should fail and die". While I am of the opinion that Antony lacked honour, and was not fit for leadership, his actions did not warrant death. It's true, Cleopatra ruined him, but would these events have occurred had it not been for her? I would have to say that it is too easy to blame Cleopatra for Antony's downfall. There is no doubt that she had a vital role to play, but it could have been any woman. ...read more.