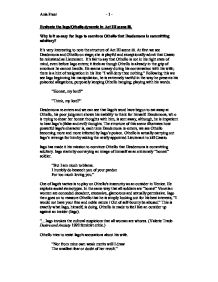 Evaluate the Iago/Othello dynamic in Act III scene iii - Why is it so easy for Iago to convince Othello that Desdemona is committing adultery?

Evaluate the Iago/Othello dynamic in Act III scene iii. Why is it so easy for Iago to convince Othello that Desdemona is committing adultery? It's very interesting to note the structure of Act III scene iii. At first we see Desdemona and Othello on stage; she is playful and exceptionally admit that Cassio be reinstated as Lieutenant. It's fair to say that Othello is not in his right state of mind, even before Iago enters; it feels as though Othello is already in the grip of emotions he cannot handle. He seems uneasy during his conversation with his wife; there is a hint of resignation in his line "I will deny thee nothing." Following this we see Iago beginning his manipulation, he is extremely tactful in the way he presents his poisoned allegations, purposely keeping Othello hanging; playing with his words. "Honest, my lord?" "Think, my lord?" Desdemona re-enters and we can see that Iago's word have begun to eat away at Othello, his poor judgment shows his inability to think for himself. Desdemona, who is trying to shear her honest thoughts with him, is sent away, although, he is impatient to hear Iago's (false and evil) ...read more.

At the same time, Iago, who separates himself from all other characters, falls prey to his own obsession with revenge. "And then, sir, would he gripe and wring my hand, Cry 'O sweet creature! then kiss me hard, As if he plucked kisses up by the roots, That grew upon my lips" This story Iago creates, is a perfect example of his obsession with plant metaphor's and how it functions within the play. Characters in this play seem to be under the control of a certain inevitable, natural forces, which, if left alone, will grow wild. Iago understands these natural forces; he is, according to his own metaphor, a good "gardener," both of himself and of others. It's not until Iago actually tells Othello this story of Cassio's dream that Othello gives in completely to the lies and cries out: "ill tear her all to pieces!" "Iago cultivates his "conceits" so that they become lethal poisons and then plants their seeds in the minds of others. The organic way in which Iago's plots consume the other characters and determine their behaviour makes his conniving, human evil seem like a force of nature. That organic growth also indicates that the minds of the other characters are fertile ground for Iago's efforts. ...read more.

Othello later describes how he feels tortured by jealousy, using images that recall Iago's words, "if there be cords or knives / poison, or fire, or suffocating streams, / ill not endure it. Would I were satisfied!" Iago has succeeded in painting a devilish picture in Othello's mind of his wife. Othello makes a "sacred vow" to wreck vengeance on her "by yond marble heaven." The climax occurs at the end of Act III, scene iii, when Othello kneels with Iago and vows not to change course until he has achieved b****y revenge. Iago's language is one of the main sources of his power. Although his characteristic idiom is very different, it is full of compounds colloquialism and oaths suiting his character of a bluff soldier. Iago is able to manipulate his style to suite his different audiences and purposes. He adopts a loftier style in his parody of Othello's idiom as he kneels next to him. This is a great example of Iago's power; he can transform his manner effortlessly. Iago has mastered his cunning and destructive power; not only is he able to direct but he also makes comments about the action in the play. Its almost as though Shakespeare is forcing his audience to collude with the villain; Iago is so clever, such an impressive actor. Ania Freer - 1 - ...read more.