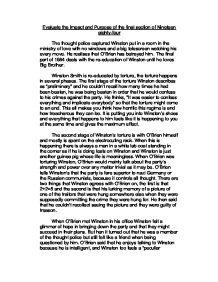 Evaluate the Impact and Purpose of the final section of Nineteen eighty-four.

Evaluate the Impact and Purpose of the final section of Nineteen eighty-four The thought police captured Winston put in a room in the ministry of love with no windows and a big telescreen watching his every move. He realises that O'Brien has betrayed him. The final part of 1984 deals with the re-education of Winston until he loves Big Brother. Winston Smith is re-educated by torture, the torture happens in several phases. The first stage of the torture Winston describes as "preliminary" and he couldn't recall how many times he had been beaten, he was being beaten in order that he would confess to his crimes against the party. He thinks, "It was easier to confess everything and implicate everybody" so that the torture might come to an end. This all makes you think how horrific this regime is and how treacherous they can be. ...read more.

He then said that he couldn't recollect seeing the picture and they were guilty of treason. When O'Brien met Winston in his office Winston felt a glimmer of hope in bringing down the party and that they might succeed in their plans. But hen it turned out that he was a member of the thought police but still felt like a friend when being questioned by him. O'Brien said that he enjoys talking to Winston because he is intelligent, and Winston too feels a "peculiar reverence for O'Brien" because he never fails to understand what is said to him. When you are in the ministry of love it feels very abnormal as you have no sense of night and day as the ministry of love has no windows in it anywhere and whereabouts in relation to the floor you are. Yours truly, could be 1/2 a mile above the ground or 1/2 a mile below ground level. ...read more.

But when face to face with the rats he said "Do it to Julia!" The significance of the final chapter is that he realises that he does love big brother. The message of 1984 is that he is writing in 1948 and he has just seen n**i Germany and Russia under Stalin, he is describing an even more extreme version of these totalitarian regimes. "The party seeks power entirely for its own sake" as O'Brien tells Winston and goes to extra-ordinary lengths to control its subjects. Orwell's message could be summed up as "If you want a picture of the future, imagine a boot stamping on a human face - for ever". I do believe that the message is as relevant in 2003 as it could still happen and just because it didn't happen in 1984 doesn't mean it will not happen some time in the future. Orwell could not have foreseen September 11th 2001 for example an extreme example of mans inhumanity to man. ...read more.

This essay engages averagely with the question. The knowledge of the final section is sound, yet there is a distinct lack of analysis here. It's not good simply retelling what happens in the passage, especially when the question is asking ...

This essay engages averagely with the question. The knowledge of the final section is sound, yet there is a distinct lack of analysis here. It's not good simply retelling what happens in the passage, especially when the question is asking for the impact and purpose. Impact refers directly to the techniques used and what effects they have, and purpose is wanting some debate about the significance of the section in reference to the novel's structure. Then further to that, you can make comments to the purpose of the novel as the whole, which this essay has attempted to do. It is important to stay focused on the question, rather than talking about everything you know, as you will lose marks for not being able to structure a coherent argument.

The analysis here is basic, but it shows potential in places. The essay does well to pick up on Orwell's use of 'preliminary' suggesting that there are numerous stages of beating, but the analysis is simply not there. Commenting on how the reader responds to the language is what required. Similarly, the quote 'it was easier to confess everything and implicate everybody' is great as it shows the power of the Party and the final impact they have over Winston, but this isn't eloquently conveyed. I would've liked to have seen this essay write about Orwell's constructions rather than stating the plot as fact. For example "When OÃ¢â‚¬â„¢Brien was torturing Winston, OÃ¢â‚¬â„¢Brien would mainly talk about the partyÃ¢â‚¬â„¢s strength" shows no understanding of Orwell constructing the plot. If you write "Orwell has O'Brien comment on the party's strength to show their power" then you will natural focus on why Orwell chooses techniques, and the effects they have. This will then enable you to move away from retelling the story and begin to analyse techniques. The comment "The significance of the final chapter is that he realises that he does love big brother" is correct to some extent, but the ending has a number of different interpretations. If you can consider the different arguments, looking at the purpose at different angles, your assertion won't seem so out of place.

The essay makes a solid attempt at a good structure. There is an introduction summarising the final section, whereas it needs to pose a strong argument and look at summarising the techniques Orwell uses in the last section. The style here is incredibly colloquial. You shouldn't be writing an essay as if you are addressing the person reading it. For example "it is putting you into Winston's shoes" is not sophisticated whatsoever. Instead, try and write about the reader. If I were writing this essay I would be saying "by doing this Orwell forces the reader to consider Winston's situation, allowing them to sympathise with him and thus fear the Party further". I'm not quite sure talking about September 11th is quite necessary or appropriate here, either, and the comment seems incredibly naive.