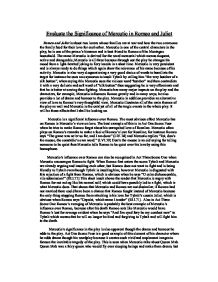 Evaluate the Significance of Mercutio in Romeo and Juliet

Evaluate the Significance of Mercutio in Romeo and Juliet Romeo and Juliet is about two lovers whose families are at war and how the two overcome the family feud for their love for each other. Mercutio is one of the central characters in the play; he is one of the prince's kinsmen and is best friend to Romeo of the Montague household. The name Mercutio is derived for the word mercurial which means eloquent, active and changeable; Mercutio is all three because through out the play he changes his mood from a light-hearted joking to fiery insults in a short time. Mercutio is very persistent and is always ready to do things which again show the relevance of his name because of his activity. Mercutio is also very eloquent using a very good choice of words to humiliate the target for instance he uses an oxymoron to insult Tybalt by calling him "the very butcher of a silk button", when saying this Mercutio uses the vicious word "butcher" and then contradicts it with a very delicate and soft word of "silk button" thus suggesting he is very effeminate and that he is better at sewing than fighting. Mercutio has many major impacts on the play and the characters, for example, Mercutio influences Romeo greatly and in many ways, he also provides a lot of drama and humour to the play. Mercutio in addition provides an alternative view of love to Romeo's very thoughtful view, Mercutio illustrates all of the main themes of the play as well and Mercutio is the catalyst of all of the tragic events in the whole play. ...read more.

Another scene which illustrates Mercutio's view of love is Act Two Scene One when Romeo has just escaped Mercutio and Benvolio and to try to make Romeo show himself Mercutio starts insulting apparent love of Rosaline. He does this by making comments like "If love is blind, then love can never hit the mark" (II.I.33) by this he is talking about Romeo's fear of speaking to her thus meaning there not being a relationship just to infuriate him. However he doesn't so he continues to make crude comments about his love, for instance Mercutio says that "now he will sit under the medlar tree" (II.I.34) which Mercutio is punning for meddling, which meant sexual activity. Mercutio's significance is also illustrated by his connections to all the main themes of the play. The main themes of the play are tragedy, tragic love and fate and Mercutio represents each one in a different way. Mercutio's speech in Act One Scene Four about Queen Mab shows the theme of tragedy the best. When Mercutio says that soldiers dream about "cutting foreign throats" (I.IV.83) and "of breaches, abuscadoes, Spanish blades" (I.IV.84) the talk of death is a good example of how the tragedy is represented, because later in the play there are four deaths all are major characters, including Mercutio. Mercutio also shows the theme of tragic love in Romeo and Juliet. Act Two Scene Four uses Mercutio's speech to show this. When Romeo enters the scene, Mercutio begins to insult Romeo again about his love by insulting historic beauties, "Dido a dowdy, ...read more.

Mercutio also has a great influence over Romeo through out the play. The real first instance is when he is able to persuade Romeo to go to the party where Benvolio couldn't, which shows a small an influence Benvolio has over Romeo, the best example of Mercutio's influence is after his death, where Romeo feels he has to avenge him even though he knows Juliet would be distraught, showing that Mercutio can reach Romeo better than Juliet could at that point in the play, I also believe that Mercutio's death has at least a small effect on Romeo's choice to commit suicide because with the apparent death of Juliet at that point and the death of his best friend Romeo would have had very few people to speak to about the deaths and to console him. I think Mercutio is quite successful when showing the themes of the play, like the theme of tragedy and fate are shown very well with his death, and the theme of tragic love is made known in two scenes, his speech about the great ancient beauties and his own death with Romeo's reaction and sorrow. These all help predict the biggest part of the play, the deaths of Romeo and Juliet because after Mercutio's death the play gets darker and introduces more sorrow, such as Romeo's exile then Juliet's marriage announcement and the loss of the message to Romeo about Juliet's fake death and finally the double suicide. ...read more.