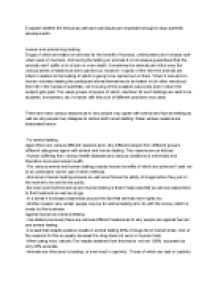 Transfer-Encoding: chunked ﻿Evaluate whether the ethical as well as moral issues are important enough to stop scientific developments Human and animal drug testing Drugs of which are tested on animals for the benefit of humans, unfortunately don?t always work when used on humans. And during the testing on animals it is not always guaranteed that the animals won?t suffer a lot of pain or even death. Sometimes the animals are killed once the various series of tests have been carried out, however, majority of the time the animals are killed in relation to the testing of which is going to be carried out on them. When it comes to to human voluntary testing the participant allows themselves to be tested on (in other words put their life in the hands of scientists, not knowing of the possible outcomes) and in return the subject gets paid. The usual groups of people of which volunteer for such testings are said to be students, low earners, etc. ...read more.

-In a sense it increases awareness around the fact that animals have rights too. -Another reason why certain people may be for animal testing is to do with the money which is made by this business. Against human and animal testing Like stated previously there are various different reasons as to why people are against human and animal testing. -It is said that despite positive results in animal testing 95% of drugs fail in human trials, One of the reasons for this is usually because the drug does not work on human trials. -When using mice, rats etc.The results obtained from this test is not not 100% accurate but only 43% accurate. -Animals are killed prior to testing or even kept in captivity. Those of which are kept in captivity are most likely to be injured due to the scientists and it is said that despite these injuries being noticed these animals are still kept in captivity. ...read more.

- When testing on animals unplanned complications may arise. As clearly shown above it is clear to see that there are many various ethical as well as moral issues around the use of animals for drug testing. Through various research it shows that drug testing on animals began many years ago. In this research it is stated that drugs tested began during the early 1980s, of which was started by small programs and then later developed into projects of which were used and carried out globally. Research also states that small/ big groups or/ and organisations have been working to stop animal testing for a fairly long time.From the period that animal testing began till now Only a little has been done to stop this form of research, it is fair to say the only thing that has changed is the fact that these scientific Industries ensure the simple comfort of animals when being tested. but it was even this being said this does not defeat the fact but animals I've been tested on against their will. ...read more.