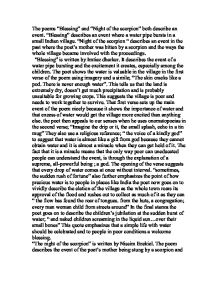 The poems "Blessing" and "Night of the scorpion" both describe an event. "Blessing" describes an event where a water pipe bursts in a small Indian village. "Night of the scorpion " describes an event in the past where the poet's mother was bitten by a scorpion and the ways the whole village became involved with the proceedings. "Blessing" is written by Imtiaz dharker. It describes the event of a water pipe bursting and the excitement it creates, especially among the children. The poet shows the water is valuable in the village in the first verse of the poem using imagery and a simile; "The skin cracks like a pod. There is never enough water". This tells us that the land is extremely dry, doesn't get much precipitation and is probably unsuitable for growing crops. This suggests the village is poor and needs to work together to survive. ...read more.

village as the whole town roars its approval of the flood and rushes out to collect as much of it as they can " the flow has found the roar of tongues. from the huts, a congregation; every man woman child from streets around" In the final stanza the poet goes on to describe the children's jubilation at the sudden burst of water; " and naked children screaming in the liquid sun...over their small bones" This quote emphasizes that a simple life with water should be celebrated and to people in poor conditions a welcome blessing. "The night of the scorpion" is written by Nissim Ezekiel. The poem describes the event of the poet's mother being stung by a scorpion and the village's response to it. The use of the first person point of view in "scorpion is effective because it makes it seem more personal and the reader feels more involved. ...read more.

of compassion in the people in the village even more with the quote from his mother after she recovered; " thank god the scorpion picked on me and not my children" To conclude both poems portray scenes in basic villages and find ways to represent their simplicity of life. However, they both end with a wider political or social comment. Both poets show their faith that god aids them in day to day life with the bringing of water and the saving of people in seemingly irreversible peril. Both poets show that villagers are unselfish and care as much about one another as they do about themselves. Both poems use imagery to great effect, planting accurate pictures in the readers mind. They differ in the tones of the poems. "Blessing" is happy because a rare event has occurred which should be revered and celebrated whereas the tone in "night of the scorpion" is dull because of the weather and the fact that a villager is dying. ...read more.