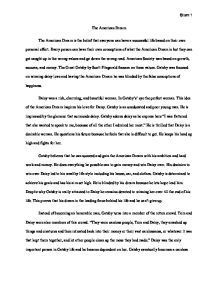 Every person can have their own conceptions of what the American Dream is but they can get caught up in the wrong values and go down the wrong road. American Society was based on growth, success, and money. The Great Gatsby by Scott Fitzgerald focuses on

Gatsby believes that he can succeed and gain the American Dream with his ambition and hard work and money. He does everything he possible can to gain money and win Daisy over. His decision to win over Daisy led to his wealthy life style including his house, car, and clothes. Gatsby is determined to achieve his goals and has his aim set high. He is blinded by his dream because he lets hope lead him. Despite why Gatsby is really attracted to Daisy he remains devoted to winning her over till the end of his life. This proves that his dream is the leading force behind his life and he can't give up. ...read more.

He stops caring about other people and focusing just on Daisy. When they kill Myrtle he is so worried that she will have problems and doesn't think about himself. His lack of concern about his future is what leads to his death. With his death, The American Dream dies too. In this novel the American Dream is not always reachable. When blinded by your goals and beliefs you can easily be taken down the wrong road. The formula for the American Dream is more than money, success and faith. Becoming independent and having self-control are needed to have your dreams in a reachable distance. Though the breakdown of Gatsby in this novel we understand that the aim for the wrong values can lead to that persons fall. Keeping the ability to see reality should be treasured. ?? ?? ?? ?? Stum 1 ...read more.

There isn't a clear indication that the candidate has a proper understanding of any aspect of the novel here. There of course, is a recognition of character sand a vague suggestion they know the plot, but either the candidate has ...

There isn't a clear indication that the candidate has a proper understanding of any aspect of the novel here. There of course, is a recognition of character sand a vague suggestion they know the plot, but either the candidate has not read the novel with enough attention or appreciation or their wording is so heavy-handed that they often don't realise that what they're saying is completely erroneous. For instance: "Gatsby is an uneducated and poor young man" suggest maybe a poor use of tense or a poor understanding of character, because Gatsby WAS "an uneducated and poor young man", until he 're-invented' himself but Carraway hints at him being slightly older than him (Carraway is 29 for the majority of the novel but is 30 by the end of it). But then statements like this suggest it is in fact a poor understanding of character that hinders this essay: "Instead of becoming an honorable man, Gatsby turns into a member of the rotten crowd." Whilst Gatsby may not be forthrightly honourable, I wouldn't go so far as to say he becomes a "member of a rotten crowd", especially not through choice, but through desperation and determination to acquire Daisy's love. This poor understanding of character and theme lends to a very poor essay with simplistic sentence structures and uninspiring analysis. I would recommend the candidate re-read to novel or seek online sources to summarise the importance of character, theme and the novel's symbols.

The Level of Analysis is fairly poor, and the candidate does not demonstrate a keen interest nor enthusiasm towards their essay. The analysis is simple and isn't very insightful nor illuminating, hence the restriction of this piece to a low C grade or maybe high D grade for GCSE. I would recommend this candidate re-read the book and then re-address the question in order to write a more cohesive answer that gives the indication to the examiner of a candidate with more knowledge of the book.

The Quality of Written Communication (QWC) is generally good, but quite poor in some parts. For instance, the candidate writes with sparsely-linked simple sentences with little complexity to them. Most of the time they simple state facts. Other times their sentences omit words and whilst they read rather plainly, a more complex sentence would suffer from this, hence the marks awarded for QWC are very low. I recommend the candidate re-reading their work after every paragraph to ensure it reads accurately, and to practise forming more complex sentence structures so as to improve their writing style.