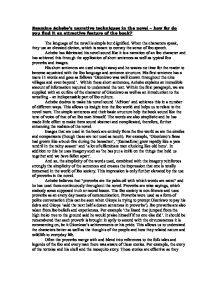 Examine Achebe's narrative techniques in the novel &quot;Things Fall Apart&quot; - how far do you find it an attractive feature of the book?

Examine Achebe's narrative techniques in the novel - how far do you find it an attractive feature of the book? The language of the novel is simple but dignified. When the characters speak, they use an elevated diction, which is meant to convey the sense of Ibo speech. Achebe has fabricated his novel sound like it is a narration of an Ibo character and has achieved this through the application of short sentences as well as typical Ibo proverbs and images. His short sentences are used straight away and he wastes no time for the reader to become aquainted with the Ibo language and sentence structure. His first sentence has a mere 11 words and goes as follows 'Okonkwo was well known throughout the nine villages and even beyond'. Within these short sentences, Achebe explains an incredible amount of information required to understand the text. Within the first paragraph, we are supplied with an outline of the character of Okonkwo as well as an introduction to the wrestling - an indispensable part of Ibo culture. ...read more.

And so, the simplicity of the words used, combined with the imagery reinforces strongly the simplicity of the sentences and creates the impression that one is totally immersed in the world of Ibo society. This impression is only further elevated by the use of proverbs in the novel. Achebe believes that "proverbs are the palm-oil with which words are eaten" and he has used them continuously throughout the novel. Proverbs are wise sayings, which embody some supposed truth or moral lesson. The Ibo society is non-literate and uses proverbs as an every day means of communication. Proverbs were used as a form of polite conversation (this can be seen when Okoye is trying to prompt Okonkwo to pay his debts and Okoye 'said the next half a dozen sentences in proverbs'). Ibo proverbs are also taken from Ibo beliefs and experiences. For example 'the lizard that jumped from the high iroko tree to the ground said he would praise himself if no one else did'. ...read more.

Also, the tale of the Mother Kite in Chapter 15 warns against attacking before knowing the strength of one's enemy - thus heightening the tension for the reader. The use of proverbs and folk tales is yet another way in which Achebe adds truth to the Ibo atmosphere in the novel. To omit them, or to use extensive tricks and flourishes of more advanced written language would have created a book from which the reader is looking into the Ibo culture from the outside. Achebe's style adds life and heightens the tension in his novel. Proverbs are used to help us understand the character's feelings. The use of short sentences helps the reader see the sentence structure and the way the Ibo people spoke in a small, yet significant way and thus helping us identify with the characters more. Overall, I would say that Achebe has made use of an African style of writing in an extremely attractive way as it helps us identify and enter the Ibo world, instead of merely reading the book and imagining what it could be like. ...read more.