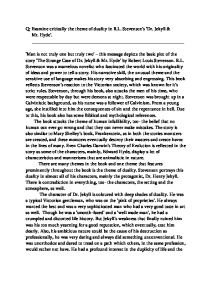 Q: Examine critically the theme of duality in R.L. Stevenson's 'Dr. Jekyll & Mr. Hyde'. _____________________________________________________________ 'Man is not truly one but truly two' - this message depicts the basic plot of the story 'The Strange Case of Dr. Jekyll & Mr. Hyde' by Robert Louis Stevenson. R.L. Stevenson was a marvelous novelist who fascinated the world with his originality of ideas and power to tell a story. His narrative skill, the unusual theme and the sensitive use of language makes his story very absorbing and engrossing. This book reflects Stevenson's reaction to the Victorian society, which was known for it's strict rules. Stevenson, through his book, also attacks the men of his time, who were respectable by day but were demons at night. Stevenson was brought up in a Calvinistic background, as his nurse was a follower of Calvinism. From a young age, she instilled into him the consequences of sin and the repentance in hell. Due to this, his book also has some Biblical and mythological references. The book attacks the theme of human infallibility, too- the belief that no human can ever go wrong and that they can never make mistakes. The story is also similar to Mary Shelley's book, Frankenstein, as in both the stories monsters are created, and these monsters eventually destroy their masters and create havoc in the lives of many. Even Charles Darwin's Theory of Evolution is reflected in the story as some of the characters, mainly, Edward Hyde, display a lot of characteristics and mannerisms that are animalistic in nature. ...read more.

It absolutely exhilarated him. 'The temptation of a discovery so singular and profound at last overcame the suggestions of alarm.' Stevenson also portrays the theme of duality in the minor characters of the book like Mr. Utterson and Dr. Lanyon. Utterson was a 'man of rugged countenance' and a lawyer by profession and also Jekyll's friend, who later unravels the mystery. The duality in Utterson's character is clearly seen in the opening lines itself. He was 'never lighted by a smile' and was 'backward in sentiment; lean, long, dusty, dreary, and yet somehow lovable.' Dr. Lanyon's character too has shades of duality. He was boisterous and he was theatrical as well. Even his physical appearance is slightly contrasting. He was a 'healthy, dapper, red-faced gentleman with a shock of hair prematurely white'. His reaction to Jekyll's discovery, i.e. the transcendental medicine, is contradictory as well. His reaction was a mixture of disapproval and curiosity. Since he was orthodox, and preferred to travel on the beaten path, he disapproved of Jekyll's research as 'scientific heresies' but on the other hand, it was Lanyon's curiosity that ultimately led to his death, as the truth was too shocking for him to bear. The harsh reality was unpalatable and to Lanyon, 'death was an answer to the frightening realities of life'. Hyde's servant, who was a woman, has a streak of duality in her character as well. She was a wicked woman, whose face was smoothed by hypocrisy. She had excellent manners but she was of a sadistic nature. ...read more.

Jekyll's mistake was not only his addiction to the drug; it was also his temptation for evil. Wisdom demands that we should not go to frontiers where we are forbidden to do so. Forbidden knowledge must remain unknown, but Jekyll's dabbling and experimenting crossed all borders and broke all frontiers. One of the messages that the book conveys is that goodness must always be vigilant in the battle against evil, otherwise evil will take command and that is exactly what had happened to Jekyll; which ultimately led to his downfall. Another message that Stevenson tries to convey to the readers through his book is that no human being is totally good or bad- humans are a mixture of both. No one is black i.e. evil and no one is white i.e. good. Every person is a shade of gray. All humans do have an animal instinct in them and also a little evil. It's just been caged in the depths of their personality. But once it comes out, it comes out 'roaring', as it has been suppressed for a long time. By stating this point, Stevenson directly attacks the myth of human perfectibility. The book also deals with the reconciliation of opposites. What Jekyll wanted was to have a good time and a good reputation as well and these are two things that never go together. You have to pay a price for everything and Jekyll escaped this by switching identities. But in the end, Jekyll had to pay a heavy price for his deeds- a price much more than what he had bargained for... ...read more.