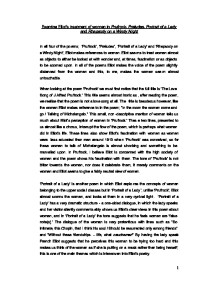 Examine Eliot's treatment of women in Prufrock, Preludes, Portrait of a Lady and Rhapsody on a Windy Night In all four of the poems; 'Prufrock', 'Preludes', 'Portrait of a Lady' and 'Rhapsody on a Windy Night', Eliot makes references to women. Eliot seems to treat women almost as objects to either be looked at with wonder and, at times, fascination or as objects to be scorned upon. In all of the poems Eliot makes the voice of the poem slightly distanced from the women and this, to me, makes the women seem almost untouchable. When looking at the poem 'Prufrock' we must first notice that the full title is 'The Love Song of J.Alfred Prufrock.' This title seems almost ironic as, after reading the poem, we realise that the poem is not a love song at all. The title is beauteous however, like the women Eliot makes reference to in the poem; "In the room the women come and go / Talking of Michelangelo." This small, non-descriptive mention of women tells us much about Eliot's perception of women in 'Prufrock.' These two lines, presented to us almost like a chorus, interrupt the flow of the poem, which is perhaps what women did in Eliot's life. These lines also show Eliot's fascination with women as women were less educated than men around 1910 when 'Prufrock' was conceived, so for these women to talk of Michelangelo is almost shocking and something to be marvelled upon. ...read more.

In 'Preludes', Eliot's view is almost degrading and at times Eliot presents an ashamed tone when he says "The thousand sordid images / Of which your soul was constituted." In 'Rhapsody on a Windy Night', Eliot takes a stance similar to the one he took in 'Preludes,' where women are not seen as beautiful creatures as in 'Prufrock', but as being 'stained'. Eliot, again, talks of prostitution with; "Regard that woman / Who hesitates towards you in the light of the door." I believe that in the poem 'Rhapsody on a Windy Night', Eliot delivers a slightly negative view of women, and the tone is cold, and in some aspects, slightly threatening at times. In the four poems; 'Prufrock', 'Portrait of a Lady', 'Preludes' and 'Rhapsody on a Windy Night', Eliot uses a profusion of imagery to enhance his description of the women, and many of the images are recycled in the different poems. Eliot uses the imagery of flowers in his poems. In 'Portrait of a lady', Eliot writes "who will not touch the bloom". The word "bloom" presents to us images of bountiful flowers, but "bloom" is also a term that can be used to describe the growth of mould. By using this imagery Eliot could be suggesting that women look beautiful, but when you look closer they are riddled with dirt and mould and that all beautiful things go stale. ...read more.

By using rhyme, more commonly associated with children's poetry, Eliot emphasises the innocent and childlike side of the woman. Eliot also writes his poems in a way which makes them multi sensory; We see "Is it perfume from a dress / That makes me so digress?" in 'Prufrock and "Her hand twists a paper rose / That smells of dust and eau de cologne" in 'Rhapsody on a Windy Night'. By appealing to our senses, Eliot draws us in to his poetry up to a point where we can almost smell exactly what he is describing, which brings us closer to the women in his poems. Between the four poems "Prufrock", "Portrait of a Lady", "Preludes" and "Rhapsody on a Windy Night" Eliot provides us with a rounded view of women. He describes the beautiful and untouchable side of them in 'Prufrock', the darker, more sordid side of women in 'Preludes' and 'Rhapsody on a Windy Night' with a description of how false women can be in 'Portrait of a Lady'. Eliot's imagery is effective in the poems, as by using it he justifies his reasons for describing the women in the way he does. I feel that Eliot describes women in the way in which he views them, drawing from personal experiences and what he takes from poets who have gone before him. Becky Harris 12G2 1,373 words 1 ...read more.