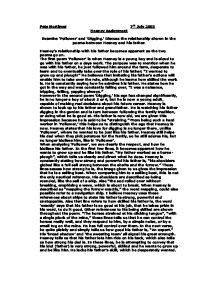 Examine 'Follower' and 'Digging.' Discuss the relationship shown in the poems between Heaney and his father.

Pete Mortimer 7th July 2003 Heaney Assignment Examine 'Follower' and 'Digging.' Discuss the relationship shown in the poems between Heaney and his father. Heaney's relationship with his father becomes apparent as the two poems go on. The first poem 'Follower' is when Heaney is a young boy and is aloud to go with his father on a days work. The purpose was to mention when he was with his father, he just followed him around the farm, desperate to learn and to eventually take over the role of his father; "I wanted to grow up and plough!" He believes that imitating his father's actions will enable him to take over the role, although he learns how skilled the work is. He is constantly saying how he admires his father. He states how he got in the way and was constantly falling over, "I was a nuisance, tripping, falling, yapping always." However in the second poem 'Digging,' his age has changed significantly, he is no longer a boy of about 5 or 6, but he is now a young adult, capable of making real decisions about his future career. Heaney is shown to look up to his father and grandfather. He is watching his father digging in the garden and is torn between following the family tradition, or doing what he is good at. His father is now old, we are given this impression because he is said to be "straining." ...read more.

Heaney tells us that his father lets him ride on his back, which also tells us how strong his dad is. In these lines, he is attempting to convey that his idol (father) is very strong, powerful, skilled and he wants to grow up and be like him. He lacks his father's skill, which he desperately wanted. In the last verse, the roles are reversed and Heaney is giving us the impression that he is now working, but I don't think that is the case; "it is my father who keeps stumbling behind us, and will not go away". I believe that his father is not literally behind him, but his memory, maybe because in 'Digging' he doesn't follow his fathers tradition, he is feeling guilty, for choosing to write, he cannot live up to his fathers level of skill. In the second poem, Heaney is a young adult around the age of 18 to 19 years old. He is making a decision as to what he wants to do when he is older. His mind is caught between following the family tradition or completing what his brain has set out to do; write. Heaney is just at working age, the poem opens when Heaney describes his pen as a gun sitting in his hand. "Snug as a gun". The simile suggests the pen belongs in his hand but it is a weapon capable of killing off his family tradition. ...read more.

By stating this we are told that his mind is made up. The skill that he once wanted has drifted away from him and his ambitions are clearly no longer in digging but in writing. "Between my finger and my thumb the squat pen rests, I'll dig with it". The relationship between Heaney and his father changed from poem to poem when he is at different ages. As a child in "Follower" Heaney obviously idolises his father and wants to be just like him, he is constantly saying how skilled he is and how he wishes to be like him. "All I did was follow". His father knows he is there and only occasionally stops work to play with his young son. I think even though Heaney is lacking his father's skill he still has a lot of respect that he is trying and is there with him at work. When Heaney is an adult in "Digging" he is thinking and learning from his own thoughts and is realising that his heart is not in carrying on his family's tradition but to write. "I've no spade to follow men like them". Heaney still realises the hard work and skill that his father puts into work and appreciates it. I think Heaney's father realised that from his son as a young child, that he would not follow his tradition. From the moment he was "tripping, falling I was a nuisance". Heaney wishes he could finish the tradition but obviously can't. His love is in writing. ...read more.