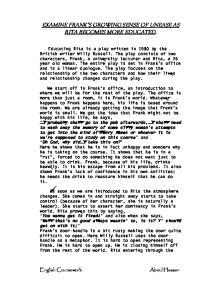 EXAMINE FRANK'S GROWING SENSE OF UNEASE AS RITA BECOMES MORE EDUCATED. Educating Rita is a play written in 1980 by the British writer Willy Russell. The play consists of two characters, Frank, a university lecturer and Rita, a 26 year old woman. The entire play is set in Frank's office and is a linear duologue. The play focuses on the relationship of the two characters and how their lives and relationship changes during the play. We start off in Frank's office, an introduction to where we will be for the rest of the play. The office is more than just a room, it is Frank's world. Whatever happens to Frank happens here, his life is based around the room. We are already getting the image that Frank's world is small. We get the idea that Frank might not be happy with his life, he says, 'I probably shall go to the pub afterwards, I shall need to wash away the memory of some silly woman's attempts to get into the mind of Henry James or whoever it is we're supposed to study on this course' and 'Oh God, why did I take this on?' Here he shows that he is in fact unhappy and wonders why he is taking on the course. ...read more.

Frank, who also went on holiday, to France, says a little about his holiday. Frank is then a little surprised to find out that Rita has moved in with a flat-mate called Trish, who, according to Rita is educated, 'Y' know she's dead classy.' This is a sign that Rita is moving up in the world and might not need Frank as much. The atmosphere in the room till now had been very light and friendly. Rita filled with confidence and motivation asks Frank if they can start the work. She wants to start studying a really good and well known poet. Frank gets a book on the poet William Blake. To his utter astonishment, he finds Rita has already done the poet at summer school. Frank realises that he is starting to lose Rita. Rita is finding other means of education. He is no longer as important, Rita now has Trish and others. Frank knows that his time with Rita is nearing an end. Frank starts to become very jealous and uneasy as we go through Act 2. Now Frank realises the more he teaches Rita the more she is moving away. Rita is starting to find her own way in life. The old Rita would never have interacted with anyone "educated" because she feared she could not talk properly or understand what they might say. ...read more.

Rita after seeing Frank's behaviour becomes angry herself. She tells Frank that nobody but him calls her Rita anymore. Frank retaliates at this by saying, 'What is it know then? Virginia? Or Charlotte? Or Jane? Or Emily?' here Frank is mocking Rita. Now that she has changed her name and become educated she must have named herself after a famous English female writer. The relationship has been destroyed. The final scene of the play (Act 2 Scene 7) both characters have come to terms with themselves. They both accept each other. Frank shows that he has accepted Rita by giving Rita a dress he bought for her, 'It's erm - well, it's er - it's a dress really. I bought it some time ago - for erm - for an educated woman friend - of mine...' Frank accepts Rita even though she has become educated. By giving the dress he shows that he is alright with her however she chooses to live her life. They also agree to start over fresh. Frank plans on heading to Australia whereas Rita has yet to decide. Frank says, 'I hear very good things about Australia. Things are just beginning there.' And 'It'd be good for us to leave a place that's just finishing for one that's just beginning.' ?? ?? ?? ?? English Coursework Aboul Hassan ...read more.