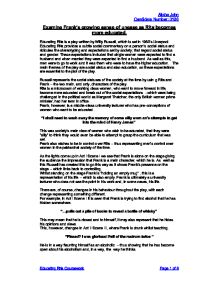 Examine Frank's growing sense of unease as Rita becomes more educated. Educating Rita is a play written by Willy Russell, which is set in 1980's Liverpool. Educating Rita provides a subtle social commentary on a person's social status and ridicules the stereotyping and expectations set by society; that regard social status and gender. These expectations included that single women were expected to find a husband and when married they were expected to find a husband. As well as this, men were to go to work and it was them who were to have the higher education. The main themes of the play are social status and also education, so these expectations are essential to the plot of the play. Russell represents the social statuses of the society at the time by using Rita and Frank - the two main, and only, characters of the play. Rita is a microcosm of working class women, who want to move forward in life, become more educated and break out of the social expectations -which were being challenged in the political world as Margaret Thatcher, the only British women prime minister, had her term in office. Frank, however, is a middle-class university lecturer who has pre-conceptions of women who want to be educated. "I shall need to wash away the memory of some silly woman's attempts to get into the mind of Henry James" This was society's main view of women who wish to be educated, that they were "silly" to think they would even be able to attempt to grasp the curriculum that was set. Frank also wishes to be in control over Rita - thus representing men's control over women in the patriarchal society of the time. ...read more.

After returning back from summer school Rita appears to be a whole new person, full of confidence control and independence. In the early scenes of Act II Rita shows Frank that she has a better control over herself, showing that she thinks before she speaks. "It was right on the tip of me tongue to say, 'Only when it's served with Parmesan cheese' but Frank, I didn't. I held it back an' I heard meself sayin'..." Rita has become more in control over her thoughts and what she says. This implies that the summer school has changed her in a positive way. While at summer school Rita became close with sum of the university students. This has made her more confident around them and ultimately within herself. This is show throughout Act II Scene I as Rita is expressing how she feels to Frank. She also surprises Frank in sum ways with her confidence. Rita: Come on, let's go an' have the tutorial down there. Frank: Down where? Rita: Down there - on the grass - come on. In the stage directions, when Frank says his line "down where?" he is supposed to be appalled, showing that this change in Rita has taken him by shock, as before she went summa school Rita never wanted to go outside, she felt as if she could not compete with the "proper" students, but now she is open and wants to be in a way set free away from Frank's office, a representation of the fact that she is moving forward away from Frank. Something also comes out of this conversation about Frank. Frank says that "like Dracula, I have an aversion to sunlight" - thus representing that he is enclosed in his office and feels he cannot go outside as he might hypothetically "die" from being exposed to the light. ...read more.

But now that she has got her qualifications she now realises that it was Frank who helped her get there. "I chose, me. Because of what you'd given me I had a choice." It is in the late stages of the play that Rita realises that she could not have gone to the tutorials, wrote the essays or passed her exam without Frank. Both characters seem to have come to terms with themselves and appear to be more settled, however, neither of them is sure what is going to happen in the future. In the latter half of the final scene Frank opens up his true feelings towards Rita. "The thing is, why don't you - come as well? It'd be good for us to leave a place that's just finishing for one that's just beginning." Frank is opening up to Rita and allowing her to see a side to him that she has never seen before, the side that shows his true feelings for her - love. He also shows her that he accepts her as an educated woman, despite his unease at her becoming educated earlier in the play. He shows his acceptance by giving her a dress. "It's erm - well, it's er - it's a dress really. I brought it some time ago - for erm - for an educated woman friend - of mine." This is a real sign as to how Frank's feelings have changed. At first he was worried and unnerved at the thought of Rita loosing most of her uniqueness and becoming educated and leaving him to go forward in the world that has treated him so bad. These feelings have now changed and Frank can now accept Rita as she is now rather than how she was when he first met her. ?? ?? ?? ?? Alisha John Candidate Number: 3108 Educating Rita Coursework Page 1 of 6 ...read more.