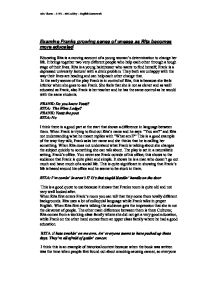 Examine Franks growing sense of unease as Rita becomes more educated Educating Rita is a moving account of a young woman's determination to change her life. It brings together two very different people who help each other through a tough stage of their lives. Rita is a young hairdresser who wants to find herself; Frank is a depressed university lecturer with a drink problem. They both are unhappy with the way their lives are heading and can help each other change that. In the early scenes of the play Frank is in control of Rita, this is because she feels inferior when she goes to see Frank. She feels that she is not as clever and as well educated as Frank, also Frank is her teacher and he has the same control as he would with the same students. FRANK: Do you know Yeats? RITA: The Wine Lodge? FRANK: Yeats the poet RITA: No I think there is a good part at the start that shows a difference in language between them. When Frank is trying to find out Rita's name and he says "You are?" and Rita not understanding what he meant replies with "What am I?" This is a good example of the way they talk, Frank asks her name and she thinks that he is calling her something. When Rita does not understand what Frank is talking about she changes the subject quickly to something she can talk about. ...read more.

Frank: You know it? She then tells him that she had already studied him because her lecturer was a real "Blake Fanatic", after this Franks asks her if she has done all the songs of innocence and experience? And Rita replies with "Of course, you don't do Blake without doing innocence and experience, do y'? "No of course" is Frank's quiet reply. Rita then exits; from this scene you get the impression that Frank is quite disappointed that Rita has already done innocence and experience. He was really happy that he was going to teach her all about Blake, now he couldn't because another lecturer already had. Frank's student is not clinging to him anymore; she is gaining in self-confidence and moving up in the world, away from Frank. Also in that scene, Rita mentions her new flatmate, Trish. When Frank asks Rita if Trish is a good influence Rita praises Trish saying that she is great and she is dead classy. This shows to the audience that Rita looks up to Trish and that she would like to be like her. This shows that Rita looks up to Rita more than she looks up to Frank. When Rita enters in Act 2 Scene 2 she starts talking in a peculiar voice, Franks asks her why she is doing it and she replies that she had " merely decided to talk properly" Frank doesn't like the way that Rita is trying to talk and says it is quite ugly. ...read more.

This seams to me that Rita is in control of her own life, and also her relationship with Frank, she has found out for herself that she has no need to go every week. She has her own independence. Near to the end of the play Frank realises what has happened, he has helped Rita to gain her own independence and she has taken it. She does not need his help anymore, he was just a teacher that she needed to help her change herself and become a new woman. I think that in the end Rita has accomplished what she wanted to, she wanted to find herself and I think she has done that. She comes back to see Frank at Christmas and see what he has done with himself, she finds out that he is still working there and that he is packing all of his books into cases. Frank is going to Australia. They have both gone their separate ways and have changed quite a bit. I think the ending makes you think that they are going to leave together but in the end they both go their separate ways. He makes you think that when Rita says " I'm gonna take ten year off you..." she might be suggesting something, but the she goes and starts to cut his hair. I think that was very good. Alex Thorne - 11Y2 - Mr Lockley - English Coursework ...read more.