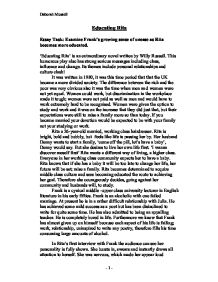 Educating Rita Essay Task: Examine Frank's growing sense of unease as Rita becomes more educated. 'Educating Rita' is an extraordinary novel written by Willy Russell. This humorous play also has strong serious messages including class, influence and change. Its themes include personal relationships and culture clash! It was written in 1980, it was this time period that that the UK became a more divided society. The difference between the rich and the poor was very obvious also it was the time when men and women were not yet equal. Women could work, but discrimination in the workplace made it tough; women were not paid as well as men and would have to work extremely hard to be recognised. Women were given the option to study and work and it was on the increase that they did just that, but their expectations were still to raise a family more so than today. If you became married your devotion would be expected to be with your family not your studying or work. Rita a 26-year-old married, working class hairdresser. Rita is bright, bold and bubbly, but feels like life is passing her by. Her husband Denny wants to start a family, 'come off the pill, let's have a baby', Denny would say. But she desires to live her own life first. 'I wanna discover meself first' Rita wants a different way of living, a higher class. Everyone in her working class community expects her to have a baby. Rita knows that if she has a baby it will be too late to change her life, her future will be set; raise a family. Rita becomes determined to acquire middle class culture and sees becoming educated the route to achieving her goal. Therefore she courageously decides, going against her community and husbands will, to study. Frank is a cynical middle -upper class university lecturer in English literature in his early fifties. ...read more.

His opinion of Rita has somewhat changed from his first judgment. From that point onwards Frank and Rita began to build a relationship starting from student- teacher to one of a more personnel level. We know their friendship blooms through their conversations, which in the early lessons seem to be on everything but literature. They begin to share their concerns about their partners. As they talk regularly in their meetings it is not long before their relationship develops enough for it to be appropriate for Rita to invite Frank to the theatre. Which he reluctantly agreed to accompany her to even though he knew if Julia had been informed it would be 'deaf and dumb breakfasts for a week.' He also attended knowing that he hates the theatre and amateur theatre even more. Their relationship has come along way since Frank sacrifices a night in the pub to attend the theatre with Rita. Rita is evidently more confident. At first she seemed insecure and constantly put herself down. Now she is confident, comfortable with Frank and has shown literary improvements. Frank gives Rita a small task of attempting to resolve the staging difficulties in a production of Ibsen's Peer Gynt. Rita comes up with a correct and astute answer and is now clever enough to understand her answer is accurate and beams at Frank as a means of showing this. Rita asks Frank out to the art gallery one day after rushing into his study on her dinner hour to inform him that she has to tell someone that she had been to a theatre 'a proper one, a professional one' she said with a glimmer. It shows their relationship is progressing since she picked Frank to share her excitement with. Frank accepts her invitation to the art gallery and in return invites her to dine with him, Julia and a few friends. When Rita finally got to Franks house on the night of the dinner party she could not face going in. ...read more.

Frank is only worried about her because he cares and Rita declares that she cares for him too and apologizes for losing her temper. Their friendship has changed a lot, but even though Rita became irritated with Frank's possessive behaviour it would not be enough to end their friendship altogether. The apology is significant it's a symbol of fixing the relationship, Rita could have just left it at that and forgotten about Frank but it proves that their friendship means something to her. There has been a complete shift in Frank and Rita's relationship. 'I got round to reading it you know, Rubyfruit Jungle, it's excellent' Rita replies with a laugh 'Oh go way Frank. Of its type it's quite interesting. But it is hardly excellent.' This shows a complete role reversal. Frank used to be the one in control and correcting Rita but now it is the other way round. For a while their relationship is not the same. Rita does not tell Frank that she leaves he5r hairdressing job to work in a Bistro. This struck Frank since there was a time when she told him everything. Rita does not need Frank and does not see any point in coming to his tutorials 'If you could stop pouring that junk down your throat in the hope that it will make you feel like a poet you might be able to talk about things that matter instead of where I do or don't work; an' then it might be worth comin' here.' Rita says that they should be dealing with literary criticism and so Frank hands her his poetry works and requests and criticism essay on it. Frank was hurt by Rita's rearms and wanted to prove that he is not as wasteful as she implies. He does this by showing her his works in the hopes to prove her wrong. Deborah Mussell - 1 - ...read more.