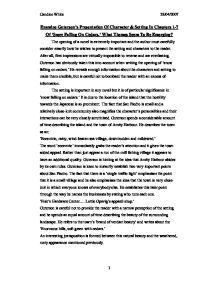 Examine Guterson's Presentation Of Character &amp; Setting In Chapters 1-7 Of 'Snow Falling On Cedars.' What Themes Seem To Be Emerging?

Examine Guterson's Presentation Of Character & Setting In Chapters 1-7 Of 'Snow Falling On Cedars.' What Themes Seem To Be Emerging? The opening of a novel is extremely important and the author must carefully consider exactly how he wishes to present the setting and characters to the reader. After all, first impressions are virtually impossible to reverse and are everlasting. Guterson has obviously taken this into account when writing the opening of 'snow falling on cedars.' He reveals enough information about the characters and setting to make them credible, but is careful not to bombard the reader with an excess of information. The setting is important in any novel but it is of particular significance in 'snow falling on cedars.' It is due to the location of the island that the hostility towards the Japanese is so prominent. The fact that San Piedro is small and a relatively close-knit community also magnifies the character's personalities and their interactions can be very closely scrutinized. Guterson spends a considerable amount of time describing the island and the town of Amity Harbour. He describes the town as an: 'Eccentric, rainy, wind-beaten sea village, downtrodden and mildewed.' The word 'eccentric' immediately grabs the reader's attention and it gives the town added appeal. Rather than just appear a run of the mill fishing village it appears to have an additional quality. ...read more.

He just couldn't find a way to do it.' This feeling of Ishmael's is shared by many of the islanders, as they are unable to find a way to like the Japanese-Americans that inhabit San Piedro. This idea of war and the devastating effects it has is central to the novel. Ishmael is not the only character who has been affected, as both Carl Heine and Horace Whaley have suffered a similar fate. '(There was) darkness of the war in Carl Heine, as there was in Horace himself.' It is not only the personal consequences of war that are dealt with within the novel but the bigger picture is also considered. It was the bombing of Pearl Harbour that brought World War Two to America and this is the main reason why the Japanese-Americans are discriminated against in San Piedro. Guterson makes the point that the racist, derogatory manner in which the Japanese are treated is ultimately due to war. He makes it clear that not only does war deeply disturb individuals but it also has a profound effect that lasts for many generations. Guterson puts it so eloquently when he states, 'There was a war on and that changed everything.' Ishmael is affected physically by the war as well as emotionally, for it was in the war that he lost his left arm. ...read more.

It would be easy for Guterson to reinforce this theme of injustice if all the Japanese were saintly and all the Americans malevolent. However, Guterson refrains from doing this and is careful to retain the realism of the novel. He includes some kind-hearted Americans and some heartless Japanese. Ishmael's father, Arthur, for example was 'morally meticulous' and 'exacting regarding the truth,' whereas the Japanese people who arranged Hatsue's mother's wedding lied to her, telling them her future husband had, 'Twelve acres of prime mountain land' when actually, 'He had nothing...but a few dollars and coins.' This illustrates what a brilliant author Guterson is, for he is able to create a realistic community through which he can convey to the reader the nature of the issues we face in society and his feelings about them. A great deal of information is established in the first seven chapters of 'snow falling on cedars.' The reader learns a lot about both the setting of the novel and the main characters. It is through these characters and the setting that Guterson is able to reinforce the central themes. It is extremely impressive the way in which he creates recurring themes that apply to many separate situations within the book. This allows more readers to relate to the issue and gives it added depth. Every minute detail that is included serves a purpose and can be in someway-related back to one of the novel's many themes. Candice White 28/04/2007 1 ...read more.