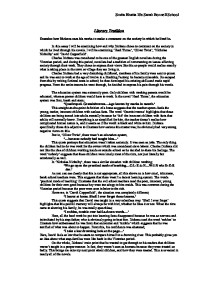 Examine how Dickens uses his works to make a comment on the society in which he lived in.

Literary Tradition Examine how Dickens uses his works to make a comment on the society in which he lived in. In this essay I will be examining how and why Dickens chose to comment on the society in which he lived through his novels. I will be examining 'Hard Times', 'Oliver Twist', 'Nicholas Nickelby' and 'David Copperfield'. Charles Dickens was considered to be one of the greatest English novelists during the Victorian period, and during this period, novelists had a tradition of commenting on issues affecting society through their work. They chose to express their views like this so people would realise exactly what is taking place in the town or village they are living in. Charles Dickens had a very disturbing childhood, members of his family were sent to prison and he was sent to work at the age of twelve in a Blacking Factory; he became miserable. He escaped from this by writing fictional texts in school; he then developed his existing skills and made rapid progress. From the entire trauma he went through, he decided to express his pain through his words. ...read more.

Imagine young boys being treated like this; only cold-blooded people could do this; '...small quantities of oatmeal...meals of thin gruels...an onion twice a week...' Most children died because of their health conditions which were appalling at that time. This was due to the lack of food which was supplied. Dickens has used adjectives such as 'small quantities' and 'thin gruels' to show the reader how little the boys were being fed at their boarding school and that if this was to be continued, there wouldn't be any boys in the boarding school because they would be dead, this was a serious matter through Dickens eyes and he proved this to us by writing about this issue more than once in his novels. Dickens chose to use words such as 'suffered', 'tortures' and 'starvation' so the readers would sympathise for them. In the novel, 'Nicholas Nickelby', Children in the boarding school were fed as if they were animals; '...poured a brown composition which looked like diluted pincushions without the covers and was called porridge. A minute wedge of brown bread was inserted in each bowl...' ...read more.

The words 'stained' and 'discoloured' could describe the young, lifeless boys because their live have been shattered by these people. However, in 'David Copperfield', the place was the opposite; '...second-best parlour...' This is quite unusual because David was receiving a really harsh lesson in a luxurious home. This was irony that Dickens used here: the word 'parlour' suggests that it is a pleasant home but what's going on inside is totally the opposite. In conclusion, Dickens has used his works successfully to comment on society because all of the issues that were affecting all classes of people, he included them so we could really understand what went on during the Victorian times. I have learnt a lot from this, about how people lived and how they were treated. I have learnt that these two periods of time were totally different to each other. The novel that had the most impact on me was Nicholas Nickelby; this is because Dickens made us feel sympathetic for the characters, he made me feel as if I was there as one of the characters because this novel was so convincing. I really felt a lot of sympathy for the children who had to suffer from this inhumane cruelty. Smita Bhatia 10s Sarah Bonnell School ...read more.