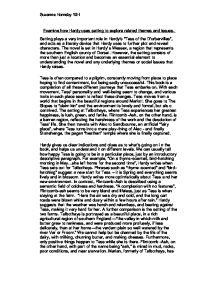 Examine how Hardy uses setting to explore related themes and issues. Setting plays a very important role in Hardy's "Tess of the D'urbervilles", and acts as a literary device that Hardy uses to further plot and reveal characters. The novel is set in Hardy's Wessex, a region that represents the southern English county of Dorset. However, the setting consists of more than just a location and becomes an essential element to understanding the novel and any underlying themes or social issues that Hardy raises. Tess is often compared to a pilgrim, constantly moving from place to place hoping to find contentment, but being sadly unsuccessful. This book is a compilation of all these different journeys that Tess embarks on. With each movement, Tess' personality and well-being seem to change, and various traits in each place seem to reflect these changes. Tess moves from a world that begins in the beautiful regions around Marlott. She goes to The Slopes to "claim kin" and the environment is lovely and formal, but also contrived. The setting at Talbothays, where Tess experiences her greatest happiness, is lush, green, and fertile. Flintcomb-Ash, on the other hand, is a barren region, reflecting the harshness of the work and the desolation of Tess' life. ...read more.

Hardy provides a strong argument against the urban movement by showing the reader its harsh effects on the rural lifestyle. The overpowering and eventual destruction of Tess parallels the Industrial Revolution's negative results on the landscape of England. Hardy uses many opposites in the book - Old vs. New being one of them. Tess is an example of old - she has a prestigious genealogy and background, and seems to represent values of a previous existence. Tess herself was a compilation of everything Hardy loved. She was a woman of nature and she represented a lot of pagan values, a pure woman who was selfless, caring and independent. She opposes industrialisation and man-made, artificial machinery in every way. Tess almost acts as a device for Hardy to indirectly voice his own concerns about society, and Hardy speaks about the machines and the railways as if they were a beast, devouring the beautiful landscape and the people within it. "The engine which was to act as the primum mobile of this little world. By the engine stood a dark motionless being, a sooty and grimy embodiment of tallness, in a sort of trance." The machine is an omnipotent presence, demanding to be tended to at all times. ...read more.

All these subtle threads of paganism woven into the novel are drawn together in a melodramatic climax to the novel at Stonehenge. Stonehenge is the ultimate pagan symbol, and Hardy describes it as a "heathen temple". It is here where Tess throws herself down in tiredness onto the sacrificial altar, and wakes up surrounded by police, ready to take her off to her execution. To conclude, setting is extremely important in "Tess of the D'urbervilles". Hardy writes very effective descriptions of each place, and uses very strong and powerful imagery. Setting is a device that Hardy uses for various purposes, and through it he reveals a lot of different themes. He also voices some of his own opinions on some of the social issues of the time and some other historical concerns, for example industrialisation and religion. Hardy has a very nostalgic attitude and this is shown through his choice of the anachronistic word "Wessex", in which the entire novel is set. Hardy also created Tess with similar nostalgic thoughts in mind, and she seems to represent values of a previous existence. This works against her and could be seen as her downfall in the novel. ?? ?? ?? ?? Suzanne Hornsby 10H ...read more.