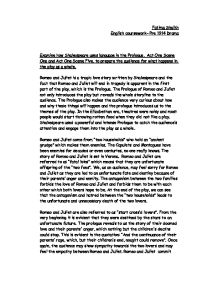 Examine how Shakespeare uses language in the Prologue, Act One Scene One and Act One Scene Five, to prepare the audience for what happens in the play as a whole.

Fatima Shaikh English coursework- Pre 1914 Drama Examine how Shakespeare uses language in the Prologue, Act One Scene One and Act One Scene Five, to prepare the audience for what happens in the play as a whole. Romeo and Juliet is a tragic love story written by Shakespeare and the fact that Romeo and Juliet will end in tragedy is apparent in the first part of the play, which is the Prologue. The Prologue of Romeo and Juliet not only introduces the play but reveals the whole storyline to the audience. The Prologue also makes the audience very curious about how and why these things will happen and the prologue introduces us to the themes of the play. In the Elizabethan era, theatres were noisy and most people would start throwing rotten food when they did not like a play. Shakespeare used a powerful and intense Prologue to catch the audience's attention and engage them into the play as a whole. Romeo and Juliet come from "two households" who hold an "ancient grudge" which makes them enemies. The Capulets and Montagues have been enemies for decades or even centuries, no one really knows. The story of Romeo and Juliet is set in Verona. Romeo and Juliet are referred to as "fatal loins" which means that they are unfortunate offspring of the "two foes". We, as an audience, may feel sorry for Romeo and Juliet as they are led to an unfortunate fate and destiny because of their parents' anger and enmity. The antagonism between the two families forbids the love of Romeo and Juliet and forbids them to be with each other which both lovers hope to be. At the end of the play, we can see that the antagonism and hatred between the "two households" leads to the unfortunate and unnecessary death of the two lovers. Romeo and Juliet are also referred to as "start cross'd lovers". ...read more.

The Prince concludes his speech by telling everyone to go and ask Lord Capulet to come with him and asks the Montagues to come in the afternoon. The Prince's speech has ten syllables in each line; however it does not contain a rhyming scheme. Due to the same amount of syllables in each line, the Prince's speech has a steady pace and keeps the audience engaged. All the anger and frustration also engages the audience and this prepares them for what is to come next by gaining their full attention. After watching this scene, the audience may believe that there will be no more fights as the penalty for a fight is death: so if they think there will be no more fights between the two families, they would start to wonder what will cause the unfortunate tragedy between Romeo and Juliet. These questions engage the audience and at the same time they keep the audience eager to keep watching. Shakespeare uses examples of personification in Act one Scene one. For example, he uses the term "mistemper'd weapons". The term "mistemper'd weapons could mean angry. Weapons cannot be described as angry as this is a feeling weapons cannot feel. Being angry is a human feeling and not feelings for objects. The use of personification portrays the image of how the weapons were being used. They were being used violently. In Act one Scene five, Romeo falls in love with Juliet as soon as he sets his eyes on her. When Romeo first sees her, he exclaims "O, she doth teach the torches to burn bright!" by this he means that her beauty is brighter than the blaze of any torch and that her presence makes the whole room light up. This makes us feel sympathetic towards Romeo as he starts to fall in love with her and we, as an audience, know that the idea of the two lovers uniting has destruction and doom written all over it. ...read more.

Romeo knows that that couldn't be right, so he takes his sin back with another kiss. Juliet, probably laughing, says, "You kiss by the book". To do something "by the book," is to do it according to the rules, and she is suggesting that Romeo is very good at interpreting the rules in a way which results in a kiss. The tension of dramatic irony increases as Juliet does not know that Romeo is a Montague and Romeo does not know that Juliet is a Capulet. The audience knowing who the two lovers are become keen to keep watching and find out how the new love between the two lovers comes to an end and how it results in the death of the two lovers. During Juliet's meeting with Romeo, we see Juliet change from the innocent and obedient girl to the disobedient girl. Juliet is supposed to be analysing Paris as her parents want her to marry him, but instead she ends up with Romeo and does not refuse to be with him which makes her disobedient as she is disobeying her parents by being with someone other than Paris. The Nurse appears with the news that Juliet's mother wants to speak with her. Juliet obediently turns away, and Romeo asks the Nurse who Juliet's mother is. The Nurse informs him that her mother is the lady of the house, and that she herself is Juliet's nurse, and that "he that can lay hold of her / Shall have the chinks". So the Nurse means that the husband of Juliet, only heir to a rich man, will make her husband rich. However, upon learning that Juliet is a Capulet, Romeo shows that he doesn't care about Juliet's money. He exclaims, "O dear account! my life is my foe's debt". Because he is in love, he now owes his very life to Juliet, and she (as a Capulet) is his foe. We as an audience can see that Romeo relay loves Juliet and is willing to be with her even though she is a Capulet. ...read more.