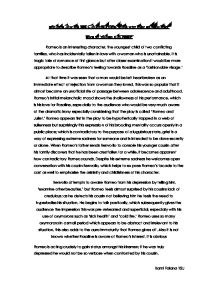 Examine how the title Characters differ in the way they express their Love in 'Romeo and Juliet' Romeo is an interesting character, the youngest child of two conflicting families, who has incidentally fallen in love with a woman who is unattainable. It is tragic tale of romance at first glance but after closer examination it would be more appropriate to describe Romeo's feeling towards Rosaline as a 'fashionable visage.' At that time it was seen that a man would be left heartbroken as an immediate effect of rejection from a woman they loved, this was so popular that it almost became an unofficial rite of passage between adolescence and adulthood. Romeo's initial melancholic mood shows the shallowness of his performance, which is his love for Rosaline, especially to the audience who would be very much aware of the dramatic irony especially considering that the play is called 'Romeo and Juliet.' Romeo appears first in the play to be hypothetically trapped in a web of sullenness but surprisingly this expression of his brooding mentality occurs openly in a public place; which is contradictory to the purpose of a lugubrious state, grief is a way of expressing extreme sadness for someone and is intended to be done secretly or alone. When Romeo's father sends Benvolio to console his younger cousin after his family discovers that he has been crestfallen for a while, it becomes apparent how contradictory Romeo sounds. Despite his extreme sadness he welcomes open conversation with his cousin Benvolio, which helps to expose Romeo's facade to the cast as well to emphasise the asininity and childishness of his character. ...read more.

As well as emphasising the prominence of Romeo and Juliet's paranormal, star-crossed love despite the circumstances. Act 1 Scene 5 welcomes the most important part of the play. Romeo meets Juliet and they are both instantly in love. Shakespeare stresses this ideology of love at first sight, by combining Romeo and Juliet's speech into a sonnet, a fourteen line poem with a strict rhyme scheme. This has an effect which replicates that of both isolation and inclusion, it makes Romeo and Juliet appear to be united but in different worlds. Romeo and Juliet meeting for the first time is where the element of love and how different people can interpret it, as well as the forms it comes in really starts to take commonplace amongst the other themes in the play. Romeo and Juliet's romantic love is such a contradiction from the love Romeo felt before. Romeo has instantaneously forgotten Rosaline as well as any regard for his own safety. Romeo is enraptured by love when he first meets Juliet; despite the fact he still reverts to the way he still thinks a man is expected to woo a lady. Regardless of his stereotype and the foundations of his words following Petrarchan foundations there is a lot more individuality in what he is saying. He is romantic and hyperbolises Juliet's beauty and describes her as celestial, holy and he elevates her above himself. There love is so clich� it can be described as fated, almost as if it was meant to be. ...read more.

Whereas Romeo hours after meeting Juliet behaves rashly towards friends, disregards his own safety and breaks back into the Capulet Mansion. His cousin Mercutio still maintains his demeaning view towards women, He makes lewd comments continuously which eventually triggers a reaction from Romeo when he says, 'you jest at scars that never felt a wound.' Shakespeare adapts Romeo's character to incorporate rashness perhaps to symbolise men generally. Despite Romeo being bounded by love, he still fails to change his perception of the way in which you have to speak, he feels as if there is a template of Petrarchan poetry. This ignorance and shallowness he displays could be considered as fundamental flaws in Romeo's character. Romeo does still when he is alone on the stage use celestial imagery and he does indeed worship Juliet but his language does combine the physical and the spiritual, this shows he is bounded by the shackles of real of love considering now there is no-one to hear what he is saying in some ways his lines are spoken in the form of a soliloquy, but it is a manifestation of feelings out loud this technique is repeated later on in the most famous scene in Romeo and Juliet. Juliet is often misinterpreted as loving Romeo less than he loves her. Juliet breaks away from this association in her supposed soliloquy on the balcony. Juliet talks extensively about Romeo's beauty and enters refutation in which she describes attempts to psychologically nullify the importance of the family name; she says 'What's Montague? It is nor hand, nor foot, nor arm, nor face, nor any other part belonging to a man. ...read more.