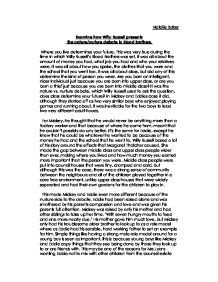 Natalie Baker Examine how Willy Russell presents the nature/nurture debate in Blood Brothers. Where you live determines your future. This was very true during the time in which Willy Russell's Blood Brothers was set. It was all about the amount of money you had, what job you had and who your relatives were. It was all about how you spoke, the clothes that you wore and the school that you went too. It was all about class, but did any of this determine the kind of person you were. Are you born an intelligent, nicer individual just because you are born into upper class, or are you born a thief just because you are born into middle class? It was the nature vs. nurture debate, which Willy Russell used to ask the question, does class determine your future? In Mickey and Eddies case it did, although they started off as two very similar boys who enjoyed playing games and running about, it was inevitable for the two boys to lead two very different adult hoods. For Mickey, he thought that he would never be anything more than a factory worker and that because of where he came from, meant that he couldn't possibly do any better. It's the same for Eddie, except he knew that he could be whatever he wanted to be because of the money he had and the school that he went to. Willy Russell based a lot of his story around the effects that Margaret Thatcher caused. She made the gap between middle class and upper class people wider than ever, making where you lived and how much money you earned more important than the person you were. ...read more.

Mickey wants to be jus like Eddie and have nice clothes and to use 'big words', 'I wish I could be like, ear clean clothes, talk properly like, do sums and history like, my friend' but Eddie wants to be like Mickey and be scruffy and use cool slang words. 'I wish I could be like, kick a ball and climb a tree like, run around with dirt knees like my friend.' To them, everyone is equal, they don't see that there should boundaries to who you can be with and what you can do. Even though Eddie was taken away from his birth mother, later in life when they are re united, without Eddie's knowledge, they begin to bond almost straight away. There is always a closeness that lingers between them. 'MRS.J: What y'lookin at? EDWARD: I thought you didn't like me. I thought you weren't very nice. But I think you're smashing.' It doesn't mean to say that adoptive parents love them any less, or can be any less close to the child, as Eddie shows much compassion for his mother, and it is obvious that he loves her very much, genetics aren't that important when it comes to a parent-child relationship. The actors had to make sure that the audience saw two different sides to Mickey and Eddie. The side that showed them as lads, both equally innocent and energetic, and the side that showed them as adults, after Mickey had been in prison, and Eddie when he came home from university. ...read more.

He comes down on the nurture side hard and does seem to side very much with the middle class side of life, making out that the upper class citizens were all the 'badies' in the play, not to many of the critics liking at the time. If you have enough money, you don't need to worry about bills for simple things like food, or paying the milkman, but when you need every penny you can get, like Mrs.Johnstone, you haven't got the financial comfort that you need with eight children, which is why she is so superstitious. She uses luck to get through life, and blame all of her problems on. Mrs.Lyons takes advantage of this and is how she persuades her to give away her baby, and then again to keep her away from Edward. It comes down to the money issue, and how much you can afford to lose, in Mrs.Johnstone's case, she is bought off and can't realistically afford to say no to the offer from Mrs.Lyons's to stay away. Though it may be a sad reality, during that time, even peoples standards for their own lives were based on where they lived. Their own hopes and aspirations, curved to where they thought the boundary for their success lay. It was as if they could only do as well as others saw fit for them. Nowadays, everyone decides his or her own future. No matter what their background is, with the right amount of determination, goals can be reached, it doesn't matter anymore about how much many you have or what area you can afford to live in. ...read more.