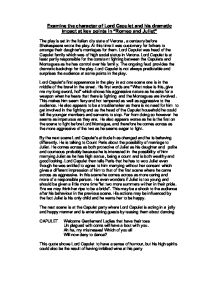 Examine the character of Lord Capulet and his dramatic impact at key points in &quot;Romeo and Juliet&quot;

Examine the character of Lord Capulet and his dramatic impact at key points in "Romeo and Juliet" The play is set in the Italian city state of Verona, a centaury before Shakespeare wrote the play. At this time it was customary for fathers to arrange their daughter's marriages for them. Lord Capulet was head of the Capulet family which was of high social status in Verona. Lord Capulet is at least partly responsible for the constant fighting between the Capulets and Montagues as he has control over his family. The ongoing feud provides the dramatic backdrop for the play. Lord Capulet is not always predictable and surprises the audience at some points in the play. Lord Capulet's first appearance in the play in act one scene one is in the middle of the brawl in the street. His first words are "What noise is this, give me my long sword, ho!" which shows his aggressive nature as he asks for a weapon when he hears that there is fighting and the Montagues are involved. This makes him seem fiery and hot tempered as well as aggressive to the audience. He also appears to be a troublemaker as there is no need for him to get involved in the fighting and as the head of the Capulet household he could tell the younger members and servants to stop. ...read more.

This is quite understandable but the fact he says some praiseworthy things about Romeo is not what the audience expects. He says that Romeo is a well respected person and therefore to leave him alone and not to cause problems at the party. Lord Capulet's authority is shown here by Tybalt's reaction despite his mild attempts he quickly gives up and does not try to persuade Lord Capulet to let him fight Romeo. In Act 3 Scene 4 Lord Capulet and Count Paris are discussing the possibility of Juliet marrying Paris again CAPULET Of my child's love: I think she will be ruled In all respects by me; nay, more, I doubt it not I think that the assumption Lord Capulet makes is a reasonable one due to the period of time the story is set, as at that time it was considered reasonable to marry off a daughter without her consent. In the above speech Lord Capulet is promising Juliet to Count Paris, on the grounds that he is probably the best offer that he will get and that if he puts the decision off any longer then Paris may look elsewhere as he with all his advantages could probably marry anyone. Lord Capulet's decision may surprise the audience as it contrasts strongly to the last time he spoke with Paris about marrying Juliet ...read more.

He is saying this to make his point clear to Juliet that he will not go back on his word. When Lord Capulet finally discovers the death of Juliet he seems greatly affected. CAPULET Dead art thou, alack my child is dead And with my child my joys are buried. It is clear that his daughter's death has hit him very hard as he feels that he has nothing left as his joys have been buried with Juliet and therefore he gains the sympathy of the audience. At this point he also realises that as Juliet was his only daughter and as he has no sons this would be the end of the Capulet line and that his house would not continue. In the final lines of the play, Lord Capulet agrees with Lord Montague that there should be an end to the hostility and fighting between the two families. He is very respectful and takes some of the responsibility for the death of Romeo and Juliet. Finally he agrees to build a large golden statue of Romeo to go alongside that of Juliet. He has obviously been affected by all of what has happened so much that he hates violence, he has learnt from his mistakes and I think that he leaves a positive image of himself on the Audience at the end. ...read more.