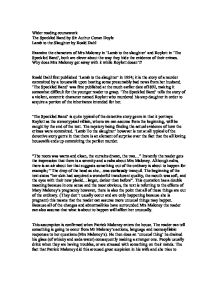 Examine the characters of Mrs Maloney in &amp;#145;Lamb to the slaughter&amp;#146; and Roylott in &amp;#145;The Speckled Band&amp;#146;, both are clever about the way they hide the evidence of their crimes. Why does Mrs Maloney get away with it while Roylott doesn&amp;#146;t

Wider reading coursework The Speckled Band by Sir Authur Conan Doyle Lamb to the Slaughter by Roald Dahl Examine the characters of Mrs Maloney in 'Lamb to the slaughter' and Roylott in 'The Speckled Band', both are clever about the way they hide the evidence of their crimes. Why does Mrs Maloney get away with it while Roylott doesn't? Roald Dahl first published 'Lamb to the slaughter' in 1954; it is the story of a murder committed by a housewife upon hearing some presumably bad news from her husband. 'The Speckled Band' was first published at the much earlier date of1892, making it somewhat difficult for the younger reader to grasp. 'The Speckled Band' tells the story of a violent, eccentric character named Roylott who murdered his step daughter in order to acquire a portion of the inheritance intended for her. 'The Speckled Band' is quite typical of the detective story genre in that it portrays Roylott as the stereotypical villain, whom we can assume from the beginning, will be caught by the end of the text. The mystery being finding the actual evidence of how the crimes were committed. ...read more.

Mary Maloney thought it essential to be somewhat cautious, this is why she practised her faces and her voice until they sounded normal. I also believe that Mrs Maloney acted out of fear for her child. Being a police detective's wife, she would have been very aware of all the procedures and sentences for crimes such as the one she'd committed. After practising her faces and voice, she then goes to the grocery store and effectively fools the grocer into becoming her alibi. In the Speckled Band, the character Roylott completely fulfils the stereotypical villain, which is where the stories differ. Roylott was a violent eccentric man whose actions and words upon meeting Watson and Holmes made him the prime suspect in the mystery. It is from the brief encounter between the three men, that the reader can gather his/her own ideas concerning Roylott's involvement in the crime. In the Speckled Band Roylott is described as 'Huge, tall, large faced, with deepset bile shot eyes' etc. Upon entering the office he did not knock but 'dashed open' the door. Here, we get the sense that he is quite a blunt and aggressive character as it is traditional, to knock before entering, this is the first time the reader is able to look into the mannerisms of his character. ...read more.

Holmes was so professional in his approach, that by the time he had examined both of the rooms in question (the one in which Julia died, and Roylott's) he had already concluded the events of the crime in his mind, all he had to do was prove his theory correct. When the mystery had finally been solved, Holmes explained the order of events to Watson, being sure to add every little detail and noise that may have been heard. Holmes' accuracy and precision were vital qualities that helped throughout the duration of the investigation. When summarising how the murder was committed, he admitted, "I had come to these conclusions before I had ever entered Roylott's room". The main points of my essay try to emphasise the complete lack of professionalism displayed by the detectives in 'Lamb to the slaughter' which led to the excusing of Mary Maloney. As a woman Mrs Maloney was able to manipulate the detectives to her advantage. Roylott however, being a man and a stereotypical villain was unable, in his conduct (confrontational, threatening etc), to detract suspicion from himself. He also found himself faced with one of the best detectives. I believe if Holmes had take n Mrs Maloney's case, he would have interrogated her to the point that she herself, told him, how, where and with what she murdered her husband. ...read more.