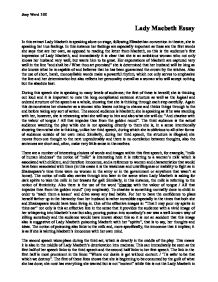 Joey Ward 10E Lady Macbeth Essay In this extract Lady Macbeth is speaking alone on stage, following Elizabethan convention in theatre, she is speaking her true feelings. In this instance her feelings are especially important as these are the first words she says that are her own, as opposed to reading the letter from Macbeth, so this is the audience's first impression of Lady Macbeth, and immediately it is clear that she is an ambitious woman who not only knows her husband very well, but wants him to be great. Her expectations of Macbeth are captured very well in the line "and shalt be / What thou art promised" she is determined that her husband will be king as she knows what he is capable of and believes that he has been guaranteed the crown by the witches. Also the use of short, harsh, monosyllabic words make a powerful rhythm, which not only serves to emphasize the line and her determination but also reflects her personality overall as a woman who will accept nothing but the absolute best. During this speech she is speaking to many levels of audience; the first of these is herself; she is thinking out loud and it is important to note the long complicated sentence structure as well as the logical and ordered structure of the speech as a whole, showing that she is thinking through each step carefully. ...read more.

Her absolute view of events reflects what was seen in the first speech; a confident woman who is utterly convinced that everything will work perfectly, a woman for whom there are no half-measures and who believes what cannot be fixed does not bear thinking about. The line "Nought's had, all's spent," portrays both sides of Lady Macbeth; first we can see that she can only see things as two, very rigid, extremes of all or nothing, the rhyming words "spent"/"content and "destroy"/"joy" give emphasis to this splitting into extremes as does "all remedy" (my emphasis) here we can see the extremities of her views as it is her belief that if it cannot be entirely solved there is no point in attempting. This splitting into extremes is the reason that the problems both she and Macbeth face affect her much more noticeably; she cannot deal with the middle ground and all of the unforeseen events that occur. All this is similar to the Lady Macbeth we see at the beginning of the play, however there is also a feeling of hopelessness in what she says; she feels that they've given everything they had into this but, because it has not turned out perfectly, they have lost it all and have nothing to show for it. ...read more.

less resistant to the changes from her ideal plan, and also the fact that she killed herself, as opposed to being killed, shows not only shame and guilt of her actions, but also that she is trying to run away rather confront what she has done. We can follow the deterioration of Macbeth through the three murders he commits; the first, the murder of Duncan, was done to gain the crown demonstrating clear thought. Macbeth ordered the second murder, being Banquo's murder, to, unnecessarily, secure his position as king as Banquo could not have dethroned Macbeth, and it is not clear even if that was his intention. The third murder, the murder of Macduff's family, from which Macbeth had absolutely nothing to gain. In this murder the audience can clearly see that Macbeth is no longer the "valiant" gentleman that we saw at the beginning of the play. However, in the final act when confronted by the army outside of his castle, he regains all of his lost valour: "At least we'll die with harness on our back." This demonstrates the how despite Lady Macbeth's confidence in her actions at the beginning of the play, she cannot face what she has done, unlike Macbeth who rather than deteriorate even further returns to the same level of honesty and bravery that we saw at the beginning of the play. ...read more.