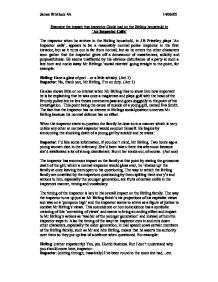 Examine the impact that inspector Goole had on the Birling household in 'An Inspector Calls' The inspector when he arrives in the Birling household, in J.B Priestley plays 'An Inspector calls', appears to be a reasonably normal police inspector in the first instance, but as it turns out is far from normal, but as he enters the other characters soon gather that the inspector gives off a demeanour of massiveness, solidity and purposefulness. He seems unaffected by his obvious disturbance of a party at such a late hour and nocks away Mr Birlings 'social niceties' going straight to the point, for example: Birling: Have a glass of port - or a little whisky. (Act 1) Inspector: No, thank you, Mr Birling. I'm on duty. (Act 1) He also shows little or no interest when Mr Birling tries to show him how important he is be explaining that he was once a magistrate and plays golf with the head of the Brumly police but he lets theses comments pass and goes doggedly to the point of his investigation. ...read more.

This coincidence or non coincidence has a symbolic meaning of this 'correcting of views' and seems to bring an ending effect and impact to Mr Birling's actions as 'teacher of the younger generation' and instead of him the inspector steps in. Also the timing of the way the inspector cuts in and cuts down other characters, especially the older generation, in mid speech cows certain members of the Birling family, such as Mr and Mrs Birling, means that he asserts his authority over them so they put up less of a defence when questioned. For example: Birling: (rather impatiently) Yes, yes. Horrid business. But I don't understand why you should come here, inspector- Inspector: (cutting through, massively) I've been round to the room she had...etc. The manner that the inspector takes up is very self confident, bordering on rudeness, makes judgements on the other characters behaviour and also seems or pretends to know everything about each persons case before they tell him. ...read more.

Inspector: If men will not learn that lesson, then they will be taught it in fire and blood and anguish. Good night. (Act 3) This speech is given even more impact in a recent production of 'An inspector calls' were the point is bellowed by the inspector in uttermost furry at the stubbornness of Mr and Mrs Birling. The inspector seems to have been the Birling family's 'moral inspector' he rooted out there actions and bought them out in a new and embarrassing light. In some instances he seemed all most ghost like from his name to his magical appearance at the Birling's house, or possibly some angle of justice for the poor unfortunate girl. What ever the inspector was he had a large impact on the Birling's because they had never known anything like him, they were the upper class, they never did anything wrong, they were above the law and when they were confronted by a man from the lower end of the social standings who pointed out there wrongs they did not know what to do. ?? ?? ?? ?? James Whitlock 4A 14/06/05 ...read more.

There is some good anlaysis of character carried out in this essay but the points are not always expressed as clearly and concisely as they could be. To ensure that points show a depth of understanding of the whole play the writer should link them to one another and to the message of the play.