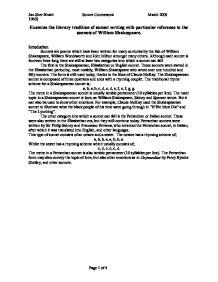 Examine the literary tradition of sonnet writing with particular reference to the sonnets of William Shakespeare.

William Shakespeare then says that eventually all beauty is lost, maybe just by chance, or because of nature, for example, by falling sick or old age. But thy eternal summer shall not fade, Nor lose possession of that fair thou ow'st, Here Shakespeare means that the loved one's beauty will not just disappear nor will it vanish due to old age or illness. Shakespeare demonstrates that the loved one will not walk in "death's" shadow, and that the person will grow old in eternal lines which will never be lost. Death is also personified here as it "brags" which shows that "death" can talk and it is therefore human or in some ways alive. After which Shakespeare says, So long as men can breathe, or eyes can see, So long lives this, and this gives life to thee. This means that the person will be beautiful as long as people are alive and can have eyes to see and read because William Shakespeare has captured the person's beauty inside this sonnet. I think that this sonnet is very good because it portrays the person's beauty very well in comparison to a summer's day which is, in my opinion, very beautiful itself. I think that the loved one would like this sonnet because it shows their good points and it may flatter them in a way. Another sonnet that William Shakespeare wrote was sonnet one hundred and thirty, My mistress' eyes are nothing like the sun..., this has the traditional Shakespearean rhyme scheme of a, b, a, b, c, d, c, d, e, f, e, f, g, g. ...read more.

The main similarity is that there is a topic on love, although in the second sonnet, Shakespeare criticises his love, while in the first sonnet Shakespeare praises his love. In both of his sonnets, Shakespeare declares his love for the person, unconditional of their personalities. Out of the two I would think that sonnet eighteen is better because Shakespeare describes the beauty of his love in comparison to that of a summer's day which I find is very beautiful to. Conclusion I find that pre-nineteenth century sonnets are still similar to new sonnets, post- nineteenth century sonnets including The Lynching, If We Must Die and Glasgow Sonnet, to name a few. For example in the sonnet, If We Must Die, the meter is iambic pentameter and the rhyme scheme is of a Shakespearean format. The Lynching, unlike some of Shakespeare's sonnets, is about the fight of black people in Claude McKay's time. Glasgow Sonnet by Edwin Morgan is written in a Petrarchan form and adopts the same rhyme scheme and also consists of an octave, which illustrates a point or opinion, and a sestet, which develops that opinion. This shows that the literary tradition of sonnet writing is still the same or similar because both the Shakespearean and Petrarchan forms are still used today. After analysing these two sonnets by William Shakespeare I find that, in my opinion, Shall I Compare Thee... is a better sonnet than My Mistress' Eyes... I think that the language that Shakespeare uses is very good because Shakespeare uses personification, and metaphors to convey an image of his lover. Jan-Sher Bhatti Sonnet Coursework March 2003 10MS Page 1 of 4 ...read more.