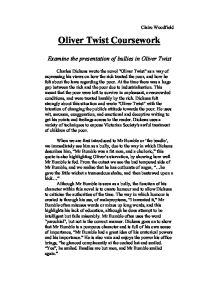 Examine the presentation of bullies in Oliver Twist

Claire Woodfield Oliver Twist Coursework Examine the presentation of bullies in Oliver Twist Charles Dickens wrote the novel "Oliver Twist" as a way of expressing his views on how the rich treated the poor, and how he felt about the laws regarding the poor. At the time there was a huge gap between the rich and the poor due to industrialisation. This meant that the poor were left to survive in unpleasant, overcrowded conditions, and were treated harshly by the rich. Dickens felt strongly about this situation and wrote "Oliver Twist" with the intention of changing the public's attitude towards the poor. He uses wit, sarcasm, exaggeration, and emotional and deceptive writing to get his points and feelings across to the reader. Dickens uses a variety of techniques to expose Victorian Society's awful treatment of children of the poor. When we are first introduced to Mr Bumble or 'the beadle', we immediately see him as a bully, due to the way in which Dickens describes him, "Mr Bumble was a fat man, and a choleric," this quote is also highlighting Oliver's starvation, by showing how well Mr Bumble is fed. From the outset we see the bad tempered side of Mr Bumble, and we realise that he has outbursts of anger, "...he gave the little wicket a tremendous shake, and then bestowed upon a kick..." Although Mr Bumble is seen as a bully, the function of his character within this novel is to create humour and to allow Dickens to criticise the authorities of the time. ...read more.

Although Oliver does attempt to do what Fagin says Oliver is still innocent at heart. Fagin is willing to corrupt an innocent soul for the sake of his own greed. At the end Fagin pays the ultimate price for his crimes by being sentenced to death. At this point Fagin is desperate and 'repulsive', which contrasts to the description of Fagin at the beginning, "villainous-looking". Originally Fagin was "devil-like' dark and scary, but his character progressed to a lonely and desperate man. In this chapter of Fagin's death Dickens builds up the suspense, first through sentencing Fagin to death, then further in the presentation of an old desperate man who is scared and reluctant to die. Fagin appears to lose much of his power and degenerates particularly in the final scene with Oliver. The final line of the chapter has a powerful impact upon the reader, "the black stage, the cross-beam, the rope, and all the hideous apparatus of death." Bill Sikes also bullies Oliver throughout this novel. When we first meet Sikes, Dickens describes him as a 'stoutly built fellow of 35' with a 'bulky pair of legs and large swelling carves.' This automatically gives the reader an impression of Sikes' power. It looks as if he intimidates people with his body size, he not only uses his body but his eyes also give a sense of ' 'power' or 'demand', "two scowling eyes". 'Sikes attacks his dog for no reason, "come here, you born devil! ...read more.

Nancy is by no means innocent as she played a vital part in kidnapping Oliver from Mr Brownlow. In spite of her environment and her conditioning, she shows that she has a sense of moral decency by attempting to help Oliver when she hears the plans of Fagin and the monks. She pays the price for betraying the gang and doing something right. This betrayal effectively brings about her murder by Sikes. Various people bully Oliver constantly throughout this novel, but he maintains his innocence, even when he is forced into an underworld of crime and violence, ' "I saw it was not easy to train him to the business, " replied the Jew, " he was not like the other boys in the same circumstances." ' Oliver's capability to adapt and survive at brutal times in his life presents Oliver as a much more complex and three-dimensional character than we would at first assume. Oliver's loving and determined nature is unaffected by the environments he finds himself in, and in spite of all the difficulties he experiences, he remains upright and virtuous. We see Oliver mature from an innocent victim of the workhouse to a worthy young gentleman. The reason Oliver is bullied is because he is seen as a lower class within society than everyone else, this is due to being an orphan and because his mother was thought to have been a prostitute. Even a charity boy bullies Oliver. Overall Oliver is seen as the hero, despite being forced into a life of crime. All those who have done wrong pay the price, by loosing their life, but the innocent shine through and survive, victorious. ...read more.