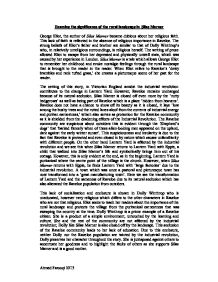 Examine the significance of the rural landscape in Silas Marner George Eliot, the author of Silas Marner became dubious about her religious faith. This lack of faith is reflected in the absence of religious importance in Raveloe. The strong beliefs of Eliot's father and brother are similar to that of Dolly Winthrop's who, in relatively unreligious surroundings, is religious herself. The writing of prose allowed Eliot to escape from her depressed and physically unwell state, which was caused by her experience in London. Silas Marner is a tale which allows George Eliot to remember her childhood and evoke nostalgic feelings through the rural landscape that is brought to the reader in the reader. When Eliot refers to Raveloe's 'dewy brambles and rank tufted grass,' she creates a picturesque scene of her past for the reader. The setting of this story, in Victorian England amidst the industrial revolution contributes to the change in Lantern Yard. ...read more.

This lack of socialization and enclosure is shown in Dolly Winthrop who is uneducated, however very religious which differs to the other characters in Raveloe who are not that religious. Eliot seeks to teach her readers about the importance of the rural landscape and protects the village from the puritanical earnestness that was sweeping the country at the time. Dolly Winthrop is a prime example of a Raveloe citizen. She is a product of a simple environment, untouched by the learning and culture. She and the rest of the community are not affected by the industrial revolution; Dolly like Silas Marner is also closed off by the landscape. This seclusion of the Raveloe community leads to her lack of education. Due to this enclosure, neither Dolly nor the Raveloe population are tainted by the industrial revolution, Dolly preserves her character throughout the story. She is juxtaposed against others to accentuate her goodness and to highlight the faults of others as she supports Silas Marner and is a good mother. ...read more.

When Eppie is older she asks Silas to build a garden for her. The garden is full of life and colour which symbolise Silas' growth and how he is mending and this continues until the end when they return to Raveloe, where it has been totally transformed by the industrial revolution. The realism in George Eliot's scenery is quiet formidable. This is important because George Eliot shapes her characters' feelings and moods using the rural scenery. It is done exquisitely in Silas Marner, George Eliot portrays Silas Marner in different ways as-well-as letting the reader know about his feelings and emotions. The rural landscape protects the community of Raveloe and Silas Marner from the tremendous change the rest of the country was experiencing. The industrial revolution was deadening to the spirit, something Eliot experienced herself in London. The members of community of Raveloe have spirit and use each other for support; Eliot portrays the community (on the whole) in a positive light. The rural landscape is fundamental in the preservation of this community. Ahmed Farooqi 10T5 ...read more.