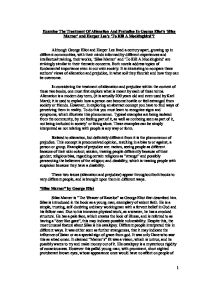 Examine The Treatment Of Alienation And Prejudice In George Eliot's 'Silas Marner' and Harper Lee's 'To Kill A Mockingbird'? Although George Eliot and Harper Lee lived a century apart, growing up in different communities, with their minds informed by different experiences and intellectual training, their works, 'Silas Marner' and 'To Kill A Mockingbird' are strikingly similar in their thematic concerns. Both novels address topics of fundamental importance even in our own society. It is interesting to compare these authors' views of alienation and prejudice, in what soil they flourish and how they can be overcome. In considering the treatment of alienation and prejudice within the context of these two books, one must first explore what is meant by each of these terms. Alienation is a modern day term, (it is actually 200 years old and even used by Karl Marx); it is used to explain how a person can become hostile or feel estranged from society or friends. However, in exploring an abstract concept you have to find ways of perceiving them in reality. To do this you must learn to recognise signs and symptoms, which illustrate this phenomenon. Typical examples are being isolated from the community, by not feeling part of it, as well as not being seen as part of it, not being included in society' or living alone. These examples can be simply interpreted as not relating with people is any way or form. Related to alienation, but definitely different from it is the phenomenon of prejudice. This concept is preconceived opinion, resulting in a bias to or against, a person or group. Examples of prejudice are: r****m, seeing people as different because of their skin colour; sexism, treating people differently because of their gender; religious bias, regarding certain religions as "strange" and possibly persecuting the believers of the religion; and disability, which is treating people with suspicion because they have a disability. ...read more.

As a teenager, he became involved with a gang of Cunningham boys. They were caught driving a car the wrong way around the square, and then mischieviously locking up the officer who tried to arrest them. All of them were punished. The other boys were sent to a state school were they would learn trades which would effectively benefit them. However, Boo supposedly, in the eyes of Mr Radley, brought disrepute to the family name, and Mr Radley was too proud to allow his son to be treated in the same way as the Cunningham's, as he stuck by his word, "No Radley should mix with any other kind." This was individually alienating him from the rest of society. Arthur was excused formal punishment and sent home to his father, and was still sentenced to a lifetime of confinement. From this he gained the reputation of a dangerous lunatic. Because of the great suspicion surrounding him, many stories were created. The best example is the one Miss Stephanie Crawford told the children. According to her, "Boo was sitting in the living-room cutting some items from The Macomb Tribune to paste in his scrapbook. His father entered the room. As Mr Radley passed by, Boo drove the scissors into his parent's leg, pulled them out, wiped them on his pants, and resumed his activities." These stories fascinated the children, and their main interest was trying to establish communication with him. The children were rapt by the stories of Boo, and how he was kept away from society-individually alienated. However from a more mature perspective, the Radleys were alienated as a group. The Radley's never assorted with their neighbours; the door of their house is kept shut. Even though Mr Radley is "So upright that he took the word of God as his only law", he never attended church with the rest of the community. Miss Maudie portrays Mr Radley as a "Foot washing Baptist." ...read more.

From this she must had first hand experience of prejudice and alienation both within a group. She had to go by the pen name of "George Eliot" as women in that bout were seen as the blacks were in America, and women writers were distinguished to not be talented enough write proper novels. Harper Lee however grew up in a time were prejudice was a key issue, but never experienced it herself. Harper Lee's novel is semi-autobiographical, as she is writing from direct experience. She had her own childhood experiences as the daughter of a lawyer in Alabama, and together with her elder brother and childhood friend, Lee enjoyed many of the small town adventures depicted in the novel. The novel is written in first person narrative. It may seem that there are drawbacks to this as the didactic knowledge may be limited, but this role in the novel is filled by Atticus. In first person narrative the reader of the novel feels more involved, and it breaks down any alienation. While with "Silas Marner", the novel is written in third person narrative and it makes the reader feel alienated from the story and the characters, and it alienates the characters as well, as it talks about them as if they are objects. Despite this Eliot adopts the persona of a humane "Silas Marner" is based over a much longer time period than "To Kill A Mockingbird". "Silas Marner" displays the changes which can happen during a lifetime, and explains the story by using flashbacks. By doing this, the novel is able to skip a lot of time. Both books are divided into two parts. In "Silas Marner", plenty of time is missed especially between part one and part two, while in "To Kill A Mockingbird" the connection between parts one and two are not immediately obvious. Part two is well unified in itself, since it is almost concerned with the Robinson trial. Part one, however, contains a wide variety of events based on a much smaller time span. Daniel Cunningham, 10c. ?? ?? ?? ?? 1 ...read more.