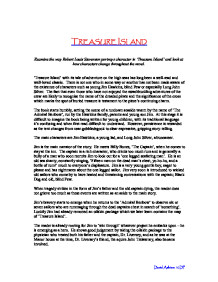 Examine the way Robert Louis Stevenson portrays character in &amp;#145;Treasure Island&amp;#146; and look at how characters change throughout the novel.

TREASURE ISLAND Examine the way Robert Louis Stevenson portrays character in 'Treasure Island' and look at how characters change throughout the novel. 'Treasure Island' with its tale of adventure on the high seas has long been a well-read and well-loved classic. There is not one who in some way or another has not been made aware of the existence of characters such as young Jim Hawkins, blind Pew or especially Long John Silver. The fact that even those who have not enjoyed the swashbuckling adventures of the crew are likely to recognise the name of the dreaded pirate and the significance of the cross which marks the spot of buried treasure is testament to the piece's continuing charm. The book starts humbly, setting the scene of a rundown seaside tavern by the name of 'The Admiral Benbow', run by the Hawkins family, parents and young son Jim. At this stage it is difficult to imagine the book being written for young children, with its traditional language it's confusing and when first read difficult to understand. However, persistence is rewarded as the text changes from near-gobbledegook to clear expressive, gripping story-telling. The main characters are Jim Hawkins, a young lad, and Long John Silver, a buccaneer. Jim is the main narrator of the story. He meets Billy Bones, 'The Captain', when he comes to stay at the inn. ...read more.

and Black dog and the blind man Pew, and I thought I know what a buccaneer was like - a very different creature from this clean and pleasant tempered landlord'. Jim and Silver went on to have a good relationship aboard the 'Hispaniola' and had many cosy chats; Long John would talk about previous voyages that he and his parrot, cap'n Flint, had undertaken. Silver went out of his way to make a friend of Jim and Jim enjoyed his company and liked him. One of the most vivid and spine chilling chapters in the book is titled 'What I Heard in the Apple Barrel' (Jim is narrating). The reader can feel Jim's stifled anger and constriction as Long John addresses a young seaman in exactly the same way as he had spoken to him, using identical words and the same flattering phrases. Jim heard Silver relate to the young seaman and the coxswain, who had by then joined them, how they were going to revolt and decide whether they were going to kill or abandon the Doctor, squire and the ship's captain and make off with the treasure. Jim was able to forewarn the captain, Dr. Liversey and the squire, once again showing his leadership qualities. His bravery and the ability to think on his feet were evident when he, on the spur of the moment, joined a landing party when they arrived at the Island. ...read more.

All along we were willing Jim to outwit Silver but at the same time not wanting Silver's demise to be too terrible! We are grateful then, when Jim stands up to Silver, '.....here you are in a bad way; ship lost, treasure lost, men lost; your whole business gone to wreck; and if you want to know who did it - it was I!' Long John stops Tom Morgan from stabbing Jim, and such is his authority over his men he protects him. We should like to believe that Silver liked Jim Hawkins and his heart may have prevented his murder, but it may also have been that he wanted Jim and the others to put a 'good word' in for him in Bristol, knowing he had failed. When Silver jumped ship in South America instead of facing the consequences of his piracy in Bristol we were glad and gladder still to learn he had taken a sack of coins; it was a fitting end for the rogue. The reader may imagine him ending his days, in comfort, with his wife on a beach in Mexico! Stevenson manages to transport us to a believable world where death is a hairs breath away; we can almost taste the salt in the air and believe in the characters. Jim is reliable from start to finish, while Silver is more complex, as villains invariably are. ?? ?? ?? ?? David Ashton 10DP ...read more.