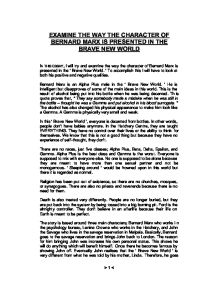 He has both several good and negative points. Due to the fact that he is an Alpha Plus he is very intelligent, and creative. He likes to do things his own way, but society forbids him to do so. However, he is still very anti-social. Marx doesn't fit into any of the 5 classes. But, so as to be fair, we can say that he would be a cross between an Alpha Plus and a Gamma. This is because he is very intelligent ( Alpha Plus ) but he is physically underdeveloped ( Gamma ). His humanity shows in a number of ways such as his desire to be independent and live life his own way. Here are two quotes which show this; " Even Epsilon's are useful!! So am I. And I damned well wish I weren't. " And, " How is it that I can't, or rather because, after all, I know quite well why I can't - what used to be like if I could, why I were free and not enslaved by my own conditioning. " This has a negative effect in this world where humanity is frowned upon. ...read more.

He also treats John like a circus attraction, or even a circus monkey. Marx is also very ambitious. As a social climber, he wants to crawl his way up to the top. Bernard has a tendency to disloyalty, shown when he is famous. Generally, I didn't think that Bernard was such an unpleasant character. To be honest, I quite liked him at the start of the book. However, reading the whole book has shown him in a very different light. All his positive and negative characteristics were revealed and we now know his true self. It is evident that he is very selfish and has a lot of negative characteristics. In our world, he could be passed off as an average person but there he would be considered quite differently. My final view of him is contrary to my initial prospect. I see him as an outcast and as an exploitative person. He deserves to be banished to Iceland after what he has done. " You can't send me, I haven't done anything. It was the others. I swear it was the others. Oh please don't send me to Iceland. I promise I'll do what I ought to do. Give me another chance. Please give me another chance. I tell you it's their fault. " ?? ?? ?? ?? > 1 < ...read more.