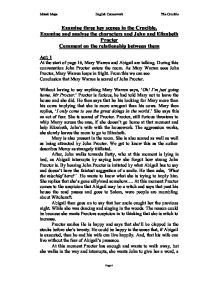 Examine three key scenes in the Crucible. Act 1,3 and 4.

Examine three key scenes in the Crucible. Examine and analyse the characters and John and Elizabeth Procter Comment on the relationship between them Act: 1 At the start of page 16, Mary Warren and Abigail are talking. During this conversation John Procter enters the room. As Mary Warren sees John Procter, Mary Warren leaps in fright. From this we can see Conclusion that Mary Warren is scared of John Procter. Without having to say anything Mary Warren says, 'Oh! I'm just going home, Mr Procter.' Procter is furious, he had told Mary not to leave the house and she did. He then says that he his looking for Mary more than his cows implying that she is more arrogant than his cows. Mary then replies, 'I only come to see the great doings in the world.' She says this an act of fear. She is scared of Proctor. Proctor, still furious threatens to whip Marry across the arse, if she doesn't go home at that moment and help Elizabeth, John's wife with the housework. The aggression works, she slowly leaves the room to go to Elizabeth. Mary is also present in the room. She is also scared as well as well as being attracted by John Procter. We get to know this as the author describes Mercy as strangely titillated. After, John walks towards Betty, who at this moment is lying in bed, as Abigail interrupts by saying how she forgot how strong John Proctor is. ...read more.

He has had enough, he begins to shake and also threaten her for a 'whipping' Abigail finally gets the message that John is no longer interested in a relationship, she is deeply sad and finally breaks in to tears. Act 2 At the start of the scene Elizabeth asks John, that why is he so late, without greeting him this tells us that Elizabeth is suspicious that John has been to see Abigail. John is putting a positive attitude toward Elizabeth and wants to start a conversation, whereas Elizabeth doesn't really want to talk to him. John repeatedly wants to begin a conversation but again Elizabeth is hesitant to talk to him. John takes another approach; he begins to complement the food. This works, Elizabeth starts to blush, implying that she is pleased with the complement. John is still trying to make conversation with Elizabeth; he suggests that they take a walk in the farm. He asks Elizabeth that if she Massachusetts is a beauty in the spring. She replies, 'Aye it is.' John realises that Elizabeth is angry, at this moment. They begin to argue, over the fact to why John is so late and whether he has been to Salem. The argument begins get tenser as both John and Elizabeth Procter are getting angry. John tells Elizabeth about the witch trials is help in Salem and Abigail has been accused. As a test of honesty, Elizabeth pleads John to tell the court that Abigail is a witch. ...read more.

At this moment John is fed up, angry and deeply hurt. He begins move around questioning himself that who is going to judge him, if Elizabeth isn't.He then begins to think whether good is evil and is still extremely hurt. At this moment Damforth enters with his companions. The judges want Johns confession to be written on the church wall, this amazes John. John confesses to have seen the devil. The judges write down John's confession, and all that John has to is sign it. The Danforth wants John to sign another paper, John refuses, each time he is asked, his anger rises each time. John and Danforth begin to argue, to why John should sign the paper '...say Procter broke his knees and wept like a woman, say what you will...' from this two points are clearly obvious. One that he doesn't not want to sign the document and the other that he is just wants to get on with the execution. This could be due to the fact that Elizabeth isn't forgiving him. John still does not want to confess and creating a lot tension between himself and the judges. John then confesses to have lied and have sold his soul. Danforth then refuses to accept the confession. He threatens to give John the rope unless he gives the correct confession. The judges are outraged. John breaks in to tears. He say, 'Not weave a banner with, but white enough to keep it from such dogs.' John makes a valid point that put the rest of the people to shame. Mitesh Mepa English Coursework The Crucible Page:1 ...read more.