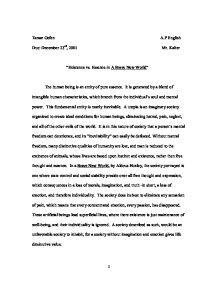 Existence vs. Essence in A Brave New World

Tamar Gefen A.P English Due: December 23rd, 2001 Mr. Kalter "Existence vs. Essence in A Brave New World" The human being is an entity of pure essence. It is generated by a blend of intangible human characteristics, which branch from the individual's soul and mental power. This fundamental entity is nearly inevitable. A utopia is an imaginary society organized to create ideal conditions for human beings, eliminating hatred, pain, neglect, and all of the other evils of the world. It is in this nature of society that a person's mental freedom can deteriorate, and its "inevitability" can easily be defeated. Without mental freedom, many distinctive qualities of humanity are lost, and man is reduced to the eminence of animals, whose lives are based upon instinct and existence, rather then free thought and essence. In a Brave New World, by Aldous Huxley, the society portrayed is one where state control and social stability preside over all free thought and expression, which consequences in a loss of morals, imagination, and truth -in short, a loss of emotion, and therefore individuality. The society does its best to eliminate any sensation of pain, which means that every concentrated emotion, every passion, has disappeared. These artificial beings lead superficial lives, where there existence is just maintenance of well-being, and their individuality is ignored. A society described as such, would be an unfavorable society to inhabit, for a society without imagination and emotion gives life diminutive value. ...read more.

Mustafa Mond says to John the Savage after his outburst against Soma, "Every discovery in pure science is potentially subversive" (Huxley, p.225). Science in this case is a potentially dehumanizing force, robbing the human race of that which makes them distinctive, their creativity, their ability to reason, and their individuality. They are designer humans created in laboratories to fit the needs of a society whose highest goals are utilitarianism and happiness, which is the ultimate objective of humanity. "World Controllers" suppress individual initiative in favor of uniformity. Science is a truth, and brings newer realties with every discovery. This does not interest stability, and therefore was banned to go on with unconventional science. Throughout a debate with Mr. Watson, the Controller admitted, Our Ford himself did a great deal to shift the emphasis from truth and beauty to comfort and happiness. Mass production demanded the shift. Universal happiness keeps the wheels steadily turning; truth and beauty can't (Huxley, p. 234). Many sacrifices had to transpire in order to achieve the artificial contentment of the Brave New World citizens and its concept of stability. They had to renounce their individuality and truth. Our society, on the contrary, embraces the truth, and recognizes science as a means of expanding our intellect. As Our society strives to enhance our thirst for knowledge and individuality, the Other World desperately tries to overcome any sense of emotional delight and either effortless or profound contemplation. This costly passion and fundamental mind power is essential for the endurance of humanity. ...read more.

Henry Ford, once stated, "You can do anything if you have enthusiasm. Enthusiasm is the yeast that makes your hopes rise to the stars. With it, there is accomplishment." It is apparent and simultaneously ironic, that not only is their very own "divine idol" emphasizing the importance of independence and personal ambition, but he openly is acknowledging the significance of emotion and free thought, attributes that Our Society cherishes and rarely undervalues. The dangers that homogeneity and detachment pose to the quality of life are present in the framework of the Brave New World society. The citizens, unknowingly, must forfeit natural, individual sentiment and interpretations on life for the purpose of the state and at the expense of a meaningful life. The key focus in the Other Society is on the ends of human existence. Their fear of progression, the control of an all-pervasive state, the intake of mere fantasy in the form of Soma, their Freudian religion founded upon "fraud", and their process of inhumane conditioning, all prove that they are unable to grasp the simple notion that "life is not about what happens to a man, but what happens within him." Thus, as the lifeless society of the Brave New World will forever burn in the inferno of meager monotonous existence, while our modern-day society of pure essence, though imperfect, will constantly strive to rekindle that small gleaming flame that lies deep within every individual- the human spirit. ?? ?? ?? ?? 1 ...read more.