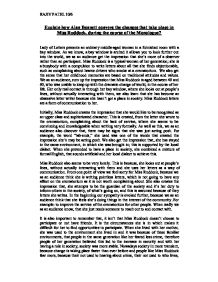 Explain how Alan Bennett conveys the changes that take place in Miss Ruddock, during the course of the monologue?

Explain how Alan Bennett conveys the changes that take place in Miss Ruddock, during the course of the Monologue? Lady of Letters presents an ordinary middle-aged woman in a furnished room with a bay window. As we know, a bay window is arched it allows you to look further out into the world, we as an audience get the impression that she's more of a observer rather than an participant. Miss Ruddock is a typical woman of her generation; she is a busybody with a compulsion to write letters about all that she finds objectionable, such as complaining about hearse drivers who smoke at a crematorium. We also get the sense that her childhood memories are based on traditional attitudes and values. We as an audience, sum up the impression that Miss Ruddock is aged between 40 and 60, who was unable to keep up with the dramatic change of world, in the course of her life. Her only real contact is through her bay window, where she looks out at people's lives, without actually interacting with them, we also learn that she has become an obsessive letter writer because she hasn't got a place in society. Miss Ruddock letters are a form of communication to her. Initially, Miss Ruddock creates the impression that she would like to be recognized as an upper class and sophisticated character. This is created, from the letter she wrote to the crematorium, complaining about the lack of service, where she seems to be convincing and knowledgeable when writing very formally. As well as this, we as an audience also discover that, there may be signs that she was just acting posh. For example, the word "tab-ends," she used was one of the words that created the impression she's may be acting posh. We also get the impression that, she has stayed in the same environment, in which she was brought in; this is supported by the local dialect. ...read more.

When really we as an audience knows she's not participating. 'The key note is participation', this phrase used by Miss Ruddock is interesting, as she does not participate herself. As with the media e.g. newspaper, her letter are not actually physically participating, therefore she seems to be contradicting herself. On the other hand, this means we as an audience are therefore less gullible. It is a modern multicultural world full of dramatic change, which has brought about insecurity, and it's because of this insecurity that imprisons her, in her own house, which brings about her being lonely. The way to escape this to be in contact and communicate with other people, she uses her letters as a form of communication. When she does this, she reduces that amount of loneliness she feels. In order for Miss Ruddock to receive a reply, she tries to make the recipient thinks that she is convincing and knowledgeable, and a person who has a role in society, when she's not. This is how she feels she is participating; when it is interesting she's not. Miss Ruddock thinks that she is apart of the world rather than an observer as she writes a lot of letters during the course of the monologue. In the beginning, we see her with her face half hidden by a shadow, this symbolises that there may be things we don't know about her. Miss Ruddock's first line is as if it were have way through explaining something and this is what engages us to read further. "I can't say the service was up to scratch. It smacked of the conveyor belt, in fact." As we know, it is a letter of complaint, complaining about, and the service not being up to scratch, grown men smoking and hearse drivers smoking during the ceremony. It is also interesting, that she chooses to pursue that matter, when normally you would deeply sorry to see the death of that person. ...read more.

After thinking hard about what she did, we as an audience can accept the fact why she did it. The reason she was lonely, we as an audience can understand why she did it and at what cost she did it. So, in some sort of way, I feel, we can allow our selves to forgive her given in what situation she was in. Also, this sinister and structive figure are proven wrong, and we as an audience get a much more caring side to Miss Ruddock. As she mentions, this genuine and good-hated letter to Shirley, we as an audience feel she's made a big redemption, as she becomes more altruistic. In terms of stage directions, the video monologue reveals to full face of Miss Ruddock with natural light, symbolizing that she's not got anything to hide and that she's changed dramatically since the beginning. In prison she takes up courses this is lead to believe that there is hope after prison for Miss Ruddock as she can now go and find a job. In prison Miss Ruddock has a chance to allow herself to fit in with other people and have role in society. 'I never said she could call me Irene. I don't want to be called Irene.' And after prison she didn't mind being called by her first name. 'Do you know what Irene said, do you know what Irene said?' Where as before she found it difficult to fit in as she doesn't work or make friends given in the circumstances she is in. in the end we feel Miss Ruddock has a role in society and that she is willing then to socialize with other people and let other people socialize with her. In the end of the monologue, she has a place in society, which we believe will bring her to cope with the modern world. When she went to prison, although we feared for her, it turned out to be good for her. It is because of prison, where she was let free and able to be in contact with other people. RAJIV PATEL 10/6 ...read more.