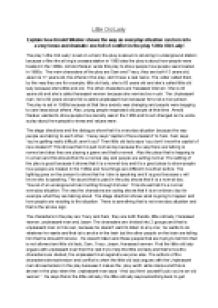 Explain how Arnold Wesker shows the way an everyday situation can turn into a very tense and dramatic one full of conflict in the play Little Old Lady.

﻿Little Old Lady Explain how Arnold Wesker shows the way an everyday situation can turn into a very tense and dramatic one full of conflict in the play ?Little Old Lady?. The play ?Little Old Lady? is set on a train; the play is about no smoking in underground station because of the fire at king?s crosses station in 1980 also the play is about how people were treated in the 1980s. Arnold Wesker wrote this play to show people how people were treated in 1980s. The main characters of the play are Sam and Tracy, they are both 15 years old, Jason is 17 years old, the others in the play, don?t have a real name. The writer called them by the way they are for example; little old lady, she is 65 years old and she?s called little old lady because she?s little and old. The other characters are Harassed Women. She is 45 years old and she?s called harassed women because she worries too much. The Unpleasant man, he is 50 years old and he is called unpleasant man because he?s not a nice person. The play is set in 1980s because at that time society was changing and people were begging to care less about others. ...read more.

I think when the characters ague or fight and the no smoking sign makes the play interesting for people to watch because in the begging of the play it was boring because it didn?t have any action but if it did then it would have been interesting for people to watch but it was good because at the start it didn?t have any action , it was all quiet and you would know that something is going to happen and that why the audience would carry on watching it because the play is going to be good but if it wasn?t then nobody would watch it , they wouldn?t find it interesting . Wesker puts a no smoking sign in the train because so people will know that something is going to happen and it did, in the play the little old lady argues with the unpleasant man because he was smoking and in the train you are not allowed and the little old lady was trying to tell the man that smoking is not allowed but he didn?t listen to her, he just ignored her. This shows that in the 1980 people didn?t respect old people at that time but children did respect old people. ...read more.