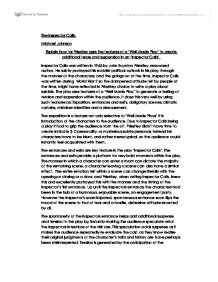 Explain how far Priestley uses the features of a Well Made Play to create additional tense and suspension in an Inspector Calls.

The Inspector Calls. Michael Johnson Explain how far Priestley uses the features of a 'Well Made Play' to create additional tense and suspension in an 'Inspector Calls'. Inspector Calls was written in 1945 by John Boynton Priestley, renowned author. He subtly portrayed his socialist political outlook in his play, through the manner of the characters, and the goings on at the time. Inspector Calls was written during World War 2 so the dampened attitude felt by people at the time, might have reflected in Priestley choice to write a play about suicide. The play uses features of a 'Well Made Play' to generate a feeling of tension and suspension within the audience. It does this very well by using such features as; Exposition, entrances and exits, obligatory scenes, climatic curtains, mistaken identities and a denouement. The exposition is a feature not only selective to 'Well Made Plays' it is introduction of the characters to the audience. ...read more.

Tension is generated by the anticipation of the characters responses to the Inspectors probing, penetrating and inquisitive questions. The obligatory scene is also a heavily used feature within the 'Well Made Play' genre. It is the part of the play where a secret is publicised and a person's integrity slashed. However Priestly ingeniously, not only liberates one secret within the play, but multiple, equally scandalous secrets. None of the characters reveal their secrets voluntarily; they all have to be extracted by the smooth, precise Inspector. An increase in suspension felt by the audience is created when witnessing an obligatory scene. Part of the reason Inspector Calls is such a well acknowledged play is because of the many, unforeseeable secrets released to the audience. Each character has their dark past extracted from the shadows and laid bare for all to see. This public humiliation entices the audiences, and makes them long for more shame to be inflicted, thus generating additional suspense. ...read more.

This then triggers them into a rapid back tracking session and they come to the conclusion the Inspector that had visited them, was not in fact an Inspector. This helps add tense and suspension to the play by further confusing the audience because they do not know what to trust. It makes them revaluate characters and think differently about them. The tension is created in the moments when the audience is waiting to find out the true identity of a character, these moments can be very dramatic and clench the audience in an unbreakable grip Priestley wanted to make sure he didn't commit the offence of over bearing his audience therefore; he chose to have the one main story line of Eva Smith's suicide and the family's involvement. However Priestley also incorporated his socialist views into the play, he also got across the message of how people should learn be 'responsible for each other'. The simple yet effective plot idea still enabled the play to be packed full of tension and crammed to the brim with suspense due to the interesting, characters ...read more.