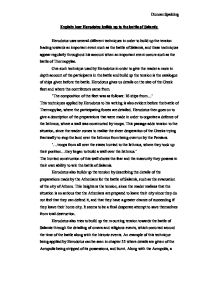 Explain how Herodotus builds up to the battle of Salamis.

Explain how Herodotus builds up to the battle of Salamis Herodotus uses several different techniques in order to build up the tension leading towards an important event such as the battle of Salamis, and these techniques appear regularly throughout his account when an important event occurs such as the battle of Thermopylae. One such technique used by Herodotus in order to give the reader a more in depth account of the participants in the battle and build up the tension is the catalogue of ships given before the battle. Herodotus gives us details on the size of the Greek fleet and where the contributors came from. 'The composition of the fleet was as follows: 16 ships from...' This techniques applied by Herodotus to his writing is also evident before the battle of Thermopylae, where the participating forces are detailed. Herodotus then goes on to give a description of the preparations that were made in order to organize a defence of the Isthmus, where a wall was constructed by troops. This passage adds tension to the situation, since the reader comes to realise the sheer desperation of the Greeks trying frantically to stop the land over the Isthmus from being overrun by the Persians. ...read more.

An example of this technique being applied by Herodotus can be seen in chapter 55 where details are given of the Acropolis being stripped of its possessions, and burnt. Along with the Acropolis, a tree supposedly sacred to Athene was burnt as well, but despite the tree being thoroughly damaged, a shoot had sprung from the charred remains of the tree. '...on the very next day, when the Athenians, who were ordered by the King to sacrifice, went up to that sacred place, they saw that a new shoot eighteen inches long had grown from the stump.' This supernatural event to a degree signifies to the reader the fact that the gods are on the side of the Greeks, and that the Persians cannot destroy them as the tree of Athene had been. Another example of a religious event, which appears to show that the gods are on the side of the Greeks, can be seen in chapter 37. At Delphi there were weapons sacred to the gods, which could not be touched by human hands, yet they mysteriously appeared from within their temple and were seen outside the temple. ...read more.

the ease of defending the narrow passage despite the vast numbers of the Persian army, and this gave the Greeks the best chance of success. Herodotus also depicts the main characters on both sides in both Thermopylae and Salamis. At Thermopylae Leonidas, the leader of the Spartan contingent is characterised alongside the Persian leader Xerxes. At Sparta, a similar comparison is made between Themistocles, the leader of the Athenians, with the Persian leader Xerxes once again. Also the Greeks are shown as being very religious and zealous, when compared to the less religiously concerned Persians. '...the people of Delphi applied to the oracle for advice...' It is evident from Herodotus' style of writing that although many of the events which he refers to are possibly shrouded in myth whilst some seem more factual, that throughout the account he attempts to engage and captivate the reader by using writing methods in order to build up tension and anxiety when important events loom. His effective use of these techniques means that he is successful in creating the build up and tension to properly captivate his readers and enhance the significance of certain events such as the battle of Salamis. Duncan Spalding ...read more.