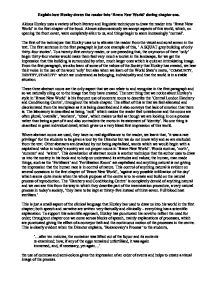 Explain how Huxley draws the reader into 'Brave New World' during chapter one.

Explain how Huxley draws the reader into `Brave New World' during chapter one. Aldous Huxley uses a variety of both literary and linguistic techniques to draw the reader into `Brave New World' in the first chapter of the book. Almost subconsciously we accept aspects of this world, which, on opening the front cover, were completely alien to us, and things begin to seem increasingly `normal'. The first of the techniques that Huxley uses us to alienate the reader from the visual and aural screen in the text. The first sentence in the first paragraph is just one example of this, ` A SQUAT grey building of only thirty-four stories'. To a twenty-first century reader, or one preceding that, the oxymoron of there `only' begin thirty-four stories would make them feel very much a tourist in the landscape, for we get the impression that this building is surrounded by other, much larger ones which is quite an intimidating image. From the first paragraph, we also learn of some of the values of the Society that Huxley has created, we hear their voice in the use of the word `only' but also when we learn of the World State's motto, `COMMUNITY, IDENTITY, STABILITY' which we understand as belonging, individuality and that the world is in a stable situation. ...read more.

The society of `Brave New World' seems to have a necessity to give everything a label; every room, every place, every process and every person has a title or is referred to be a name. Many of these titles are words, which we, as readers, cannot relate to because we do not recognise but by the way in which Huxley presents them, we build up an image of their significance and level of importance. An example of this is that `bokanofskified', a word which we certainly do not use ourselves, is not capitalised which suggests that it is a regularly used noun and we should accept is as something quite common whereas the `Social Predestination Room' is of more individual importance and therefore is capitalised in this context. As well as giving things labels, we are also introduced to a lot of things in the first chapter in terms of figures and the amount of them that there are, can be, have been or could be which relates to the clinical and factual methods of the Centre, `And you get an average of nearly eleven thousand brothers and sisters in a hundred and fifty batches of identical twins all within two years of the same age.' ...read more.

By alienating us from the visual and aural aspects of the `Brave New World', Huxley provokes out natural human instinct to explore and to create our own views which we find strongly reflect those of the students and so, society, as we are given no alternative at all. Our inclusion in the tour, which the students are being given throughout the chapter, is very effective as it takes us right to the core of the action and almost engages us in the `privilege' of being educated by the Director himself. The use of concrete nouns creates an impersonal, methodical and clinical atmosphere and the effect of these being predominantly plural is that we see the lack of individuality in society, which is emphasised by characters such as Mr Foster and what they say. Finally, the way in which the Director's speech and narrative often become confused demonstrates the fact that personal views are blurred with what society believes to be correct and that they are, in fact, intended to be the same. From the de-familiarity of the `Squat grey building of only thirsty-four stories' to the complete understanding of `Bokanovsky's process' we come a long way in chapter one of Huxley's `Brave New World' and become included in the attitudes, values and actions of his society. ...read more.