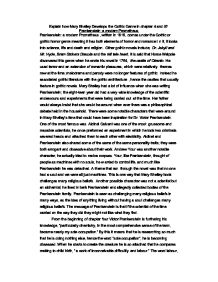 Explain how Mary Shelley Develops the Gothic Genre in chapter 4 and 5? Frankenstein: a modern Prometheus Frankenstein: a modern Prometheus, written in 1816, comes under the Gothic or gothic horror genre meaning it has both elements of horror and romance in it, it looks into science, life and death and religion. Other gothic novels include; Dr. Jekyll and Mr. Hyde, Bram Stokers Dracula and the tell tale heart, it is said that Horse Walpole discovered this genre when he wrote his novel in 1764, the castle of Otranto. He used terror and an extension of romantic pleasures, which were relatively themes new at the time; melodrama and parody were no longer features of gothic. Instead he associated gothic literature with the gothic architecture, hence the castles that usually feature in gothic novels. Mary Shelley had a lot of influence when she was writing Frankenstein; the eight-teen year old had a very wide knowledge of the scientific endeavours and experiments that were being carried out at the time. Her father would always insist that she would be around when ever there was a philosophical debate held in the household. There were some notable characters that were around in Mary Shelley's time that could have been inspiration for Dr. ...read more.

My limbs now tremble" he is horrified by what he is doing, and is now becoming frightened because of it. The torture of animals and grave robbing are very, gruesome and gothic ideas. The effect is to make the reader feel disgusted by the undertakings of Frankenstein. I feel sorry for the doctor, as his obsession and hunger for success has driven him to desperate measures. At the end of chapter four, when the monster is completed he describes his appearance, "I appeared rather like one doomed by slavery to toil in the mines" this means that his appearance is not attractive; he looks gaunt, skinny and sickly. The gothic feature present here is the fact that he looks quite like a corpse himself, or a vampire as if by doing this he has taken away his humanity. He also says that "Every night I was oppressed by a slow fever" meaning at the end of every night he grew ill, his obsession has put a staring on his body and he is getting sick. The use of the first person lines, e.g."my friend, that you expect to be informed of the secret" these draw the reader in and create tension, as it is making it personal like Frankenstein is talking to us in a convocation. ...read more.

After all the time he has spent watching the dead bodies decompose and being detached, he is projecting it onto someone that he cares about. Even though the dream is sickening and blood curdling it means that he is becoming more human again, as he is now seeing the true horrors of his actions. In paragraph five his being to feel sickly, "I nearly sank to the ground through languor and extreme weakness" this a kind of karma, a typical gothic feature, he is now feeling weak because of the abomination his has created, and the fact he has taken no responsibility for it. An effect that the novel would have on a modern audience would not be the same, but it would have a large impact. Since there is a large speculation on genetic experiments, like cloning and its ethical issues would have an impact, but the religious side of things may not be as notable. The gruesome and horror of the book however will not be lost, many people would still be sickened to think of a man stealing rotting body parts to recreate life, that of the novel would not of been forgotten. I think that Frankenstein has been successful because of its challenging views and gory descriptions, many audiences like to have the feeling of fear but it the mixture of horror and the undertone of the realism of the book that makes it successful. ...read more.

This essay responds to the question well, engaging with the gothic concepts in Frankenstein. I do feel as if there is too much feature spotting going on, as there are numerous instances where this essay picks up on pathetical fallacy ...

This essay responds to the question well, engaging with the gothic concepts in Frankenstein. I do feel as if there is too much feature spotting going on, as there are numerous instances where this essay picks up on pathetical fallacy and doesn't really develop an argument to what effect they have. Whenever you're looking at gothic, it's best to look at a number of techniques which contribute towards concepts (horror, sublime, terror, uncanny) rather than simply finding features (dark imagery, violence, pathetical fallacy). This will allow a cogent argument to form which looks at the effect of gothic as a genre, rather than simply finding features which contribute to it.

The analysis here is sound. I liked how language was analysed closely, with the connotations of words being explored. However, as mentioned above I feel this sort of analysis needs to contribute to an overall effect. For example stating "the words catastrophe and wretch describe the monster in distain with hatred" is great language analysis, but it isn't answering the question. There should be another sentence exploring how this language technique used by Shelley contributes to the gothic. I would've liked the essay to analyse with a different style. For example the paragraph beginning "In chapter four Frankenstein becomes increasingly obsessed" includes a lot of retelling and narration of the plot. You won't gain marks for simply having knowledge of what goes on. I would rephrase the opening as "Shelley has Frankenstein become increasingly obsessed as chapter four continues to show his lack of control, building the reader's horror for his creation". There needs to be a sharp focus on the task, and there isn't always one here.

The introduction here is exactly what examiners don't want to see: a lengthy paragraph including a lot of irrelevant background information. Some of the ideas are great in this introduction such as "Frankenstein is seen as challenging many religious beliefs in many ways, as the idea of anything living without having a soul challenges many religious beliefs." but these need to be included within the analysis to build the argument, rather than dumping a load of context in the introduction. An introduction should be used to pose a clear argument, defining the key terms in the question. If I were answering this question, I would be defining the gothic briefly and summarise how Shelley develops this. The conclusion is better, as it comes to a justified judgement and weaves together the argument. Spelling, punctuation and grammar are fine but there are a few slips. I'm not a big fan of the first person being used throughout, as I feel the style feels unsophisticated. For example saying "this effect makes me feel closer" suggests it's a personal feeling, rather than one constructed by the author. Simply replacing it with "the reader can then feel closer because of Shelley's technique" is much more sophisticated.