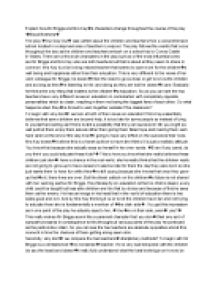 Explain how Mr Briggs and Mrs Kay?s characters change throughout the course of the play ?Blood Brothers? The play ?Our Day Out? was written about the children and teachers from a comprehensive school located in a deprived area of southern Liverpool. The play follows the events that occur throughout the day as the children and teachers embark on a school trip to Conwy Castle in Wales. There are a few main characters in the play but two of the most influential ones are Mr Briggs and Mrs Kay who are both teachers but that is about all they seem to share in common. Mrs Kay is a fun loving relaxed teacher that seems to care more for the children?s well being and happiness rather than their education. This is very different to the views of her work colleague Mr Briggs; he doesn?t feel the need to grow close or get to know the children and as long as they?re listening to him and doing as they are told he doesn?t care. Basically he thinks the only thing that matters is the children?s education. So as you can see the two teachers have very different views on education in combination with completely opposite personalities which do clash, resulting in them not being the biggest fans of each other. So what happens when they?re forced to work together outside if the classroom? ...read more.

On the other hand though there is Mrs Kay, a fun loving, relaxed, playful teacher that really talks to the kids in a laid back friendly manor much to Mr Briggs? distaste. She makes jokey comments to the children but still get her point across in what seems to be a more successful way than Mr Briggs. This is way the children favour her over Mr Briggs and overall care more about what she has to say rather than him. So as you can see the two teachers? views on just about anything seem completely parallel to each other. Although, we haven?t yet looked at the type of language they use with the children or there personal relationships they share with the kids. To start of why Mrs Kay talks to the pupils in an informal soft tone, she is polite and loving towards the child which does not all ways go down well with her colleagues. A few of them describe her as more of mother hen toward the kids rather than there teacher, which is not a particularly positive thing when she is supposed to be teaching and educating them. It is things like this that anger Mr Briggs as it goes against everything he believes in when it comes to his job. He believes that there should be a barrier, a wall, a fortification between the teacher and pupil. ...read more.

So finally, to sum it all up Mr Briggs and Mrs Kay are both strong individual characters that both have passionate opinions on what makes a good teacher and what�s is best for the well being of the children. This is why they often seem to clash and find it so hard to agree because neither thinks they�re wrong therefore they both think they�re right. But I personally think neither are right, I think Mrs Kay probably would be the more fun teacher where your enjoy her company but that doesn�t make her a good one. Nevertheless I don�t agree with Mr Briggs, I think he is rude aggressive and not some one I would choose to spend my time with. However I do not think he is fully conscience of the outcomes all of his actions have. Hence why I don�t think Mrs Kay is much better than him teaching wise. So in conclusion neither teacher is perfect but they both have their positives, maybe they need a bit of each other to help improve them selves possibly if Mrs Kay started to add a bit more authority and structure into her teaching it wouldn�t go unnoticed and it wouldn�t hurt Mr Briggs to soften up a bit, and begin to open up more to let the kids see he is not necessarily a bad teacher or person.  Alastair Macaulay 8Shirley ...read more.