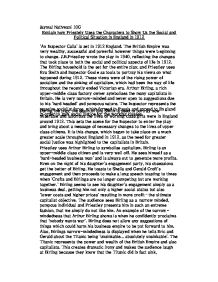 Jaymal Nathwani 10G Explain how Priestely Uses the Characters to Show Us the Social and Political Situation in England in 1912 'An Inspector Calls' is set in 1912 England. The British Empire was very wealthy, successful and powerful however things were beginning to change. J.B.Priestley wrote the play in 1940, reflecting the changes that took place to both the social and political aspects of life in 1912. The Birling household is the set for the entire play, and Priestley uses Eva Smith and Inspector Goole as tools to portray his views on what happened during 1912. These views were of the rising power of socialism and the sinking of capitalism, which had been the way of life throughout the recently ended Victorian era. Arthur Birling, a rich upper-middle class factory owner symbolises the many capitalists in Britain. He is very narrow-minded and never open to suggestions due to his 'hard headed' and pompous nature. The Inspector represents the massive socialist force, which formed in Russia and spread to England in order to gain social justice for the working classes. During the play, the death of Eva Smith is used to portray how miserable and laborious the lives of working class girls were in England around 1912. ...read more.

Birling exploits Eva, just like he exploits all of his other working class girls. However, Eva shows her spirit at times, such as when she helps lead a protest for higher wages. Although she was sacked, Priestley used this to display the fact that socialism was in the background and if more and more people like Eva stood up for social justice then the capitalists would have to listen. Birling squashes Eva to show what would happen to anybody rebelling against his 'lower costs, higher prices' slogan. To him, Eva was just another 'crank'. Priestley however presents Eva as the direct opposite to Birling because he was a capitalist, and she was a socialist. Priestley makes his audience like Eva because she 'had been pretty' and was described to have 'no money coming in' and was also very lonely. Priestley uses this description of a promising young life gone to waste to guide the audience to supporting socialism, which he was a follower of himself. During the 'chain of events' that led to Eva's death, none of the Birling family took a moment to consider the consequences of their actions toward her. ...read more.

The fact that power, rank, status and wealth are all things which Gerald has, doesn't bother the Inspector because its all of these things which have led to the imbalance in society which has led to Eva's death in the first place. Gerald also has secrets, he chooses not to tell the inspector about his affair with Eva (Daisy Renton) and shows how people with power would use working class girls for sex. Priestly uses Gerald to highlight another fact about capitalists - the fact they abuse young working class girls, because they simply have the power to do so. The arrival of the inspector at the Birling residence is a very significant event, both literally and metaphorically. He knocks at the door, which signifies a change in the life of the Birling family and a change for capitalists everywhere in England. The timing of the Inspectors call also holds significance as it is during the middle of another pompous speech by Birling. This is a metaphor for the immediate interruption by socialism against capitalism. It also highlights one of the inspector's key messages - that the Birlings and all capitalists must change, and fast. The inspector's abrupt arrival to the Birling household is used by Priestley to highlight the rapid change which took place as socialism came knocking at capitalisms door. ...read more.