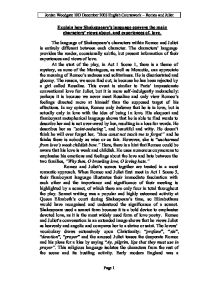 Explain how Shakespeare's language conveys the main characters' views about, and experiences of, love.

Explain how Shakespeare's language conveys the main characters' views about, and experiences of, love. The language of Shakespeare's characters within Romeo and Juliet is entirely different between each character. The characters' language provides the reader, occasionally subtle, but present information of their experiences and views of love. At the start of the play, in Act 1 Scene 1, there is a theme of mystery, as none of the Montagues, as well as Mercutio, can appreciate the meaning of Romeo's sadness and solitariness. He is disorientated and gloomy. The reason, we soon find out, is because he has been rejected by a girl called Rosaline. This event is similar to Paris' impassionate conventional love for Juliet, but it is more self-indulgently melancholy: perhaps it is because we never meet Rosaline and only view Romeo's feelings directed more at himself than the supposed target of his affections. In my opinion, Romeo only believes that he is in love, but is actually only in love with the idea of being in love. His eloquent and flamboyant metaphorical language shows that he is able to find words to describe her and is not over-awed by her, resulting in a loss for words. He describes her as "saint-seducing", and beautiful and witty. He doesn't think he will ever forget her, "thou canst not teach me to forget" and he thinks there is nobody as wise or as fair. However, she is "uncharmed from love's weak childish bow." Here, there is a hint that Romeo could be aware that his love is weak and childish. He uses numerous oxymorons to emphasise his emotions and feelings about the love and hate between the two families, "Why then, O brawling love, O loving hate." ...read more.

love; the passionate, lustful side as opposed to the romantic side, for example, "If love be blind, love cannot hit the mark, ('target', or s****l intercourse) now will he sit under a medlar tree" (a brown, apple-like fruit which was said to resemble the female s****l organs) and, states the time by declaring, "the bawdy hand of the dial is upon the p***k of noon." Mercutio talks about Cupid and Venus, two pagan symbols of love, but speaks about love in the most physical of terms, referring to Rosaline's "scarlet lip" and "quivering thigh." Mercutio always talks about the human body, as he did in the queen Mab speech, in very physical and bawdy terms. This is why Mercutio believes Romeo will think of Rosaline in these terms, because love for Mercutio is the same as physical l**t. He and many other characters in the play cannot understand that love can be pure and passionate. Romeo and Juliet are isolated in the play because others do not understand their love from the romantic and lustful points of view. Romeo remarks that Mercutio can easily make fun of him because Mercutio has never been in love; 'he jests at scars that never felt a wound'. This is ironic, as Romeo is referring to the scars of love but Mercitio is soon to be scarred and fatally wounded in his fight with Tybalt. The Nurse, like Mercutio, has a bawdy sense of humour, however, the Nurse's is much more mild. They both concentrate on the physical and often s****l side of life: the Nurse's summary of Romeo in Act 2 Scene 5 is focused on physical description - his face, his leg, his hand, his foot and body - echoing Mercutio's earlier description of Rosaline. ...read more.

and Luhrmann includes frequent close-ups of Juliet's tearful face and has the bellowing Lord Capulet push Juliet her up against the wall and hit her. The Nurse and the Friar partially take the place of parental love, however, they ultimately fail Romeo and Juliet. The Friar is loving and caring towards Romeo, and takes interest in his day to day activities, "What early tongue so sweet saluteth me?" "Our Romeo hath not been in bed tonight." His view of love states that too much will or passion can turn to vice. "Wisely and slow, they stumble that run fast". This is an underlying theme in the play and one which the friar is always repeating and emphasising. He believes that young men's love lies in their eyes. I believe that they are both in error in trying to keep Romeo and Juliet happy without thinking enough about what is right. Juliet is terrifyingly committed to what is right in a way that shames the older people. The Nurse in Act 3 Scene 5, attempts to persuade Juliet to marry Paris, "Romeo is banished"..."I think it best you married with the county. O he's a lovely gentleman." As a representative of Christian love, Friar Lawrence tries hard, but never solves the conflict between Christian teaching and worldly desires. Both the language of love and the language of death play important roles in the tragedy. They cooperate with light and dark imagery to make the play the masterpiece it is, a play of paradoxes and oxymorons, good and evil, neither one whole without the other. For without love there would be nothing to lose, and without death there would be no way to lose it. Jordan Woodgate 10D December 2003 English Coursework - Romeo and Juliet Page 1 ...read more.