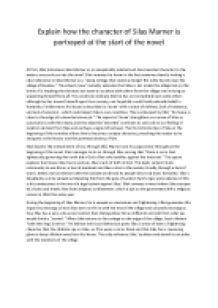 ï»¿Explain how the character of Silas Marner is portrayed at the start of the novel At first, Eliot Introduces Silas Marner as an inexplicably isolated and disconnected character to the reader, very early on into the novel. Eliot narrates his home in the first sentence directly making a clear reference to Silas Marner as a "steep cottage that stands amongst the nutty haunts near the village of Raveloe." The adverb 'near' instantly indicates that Silas is not inside the village but on the brink of it, implying that he does not want to socialise with others from the village and in doing so separating himself from all. ...read more.

The first introduction of Silas at the beginning of the narrative allows him to become a unique character, provoking the reader to be intrigued at the history and the potential destiny of him. Eliot depicts the embodiment of loss through Silas Marner and his appearance throughout the beginning of the novel. Eliot manages to do so through Silas cursing that "there is not a God righteously governing the earth but a God of lies who testifies against the innocent." This quote explains four losses Silas has to endure, Silas's lack of faith in God. This leads Lantern Yards community to see this as a loss of mankind and then a loss in the society. ...read more.

During the beginning of Silas Marner, he is viewed as anomalous and frightening. Elliot generates this impact by showing us how Silas does not fit in with the rest of the village and secondly showing us how Silas has a very anti-social conduct that distinguishes him as different and odd from what we would think is "normal." When Silas returns to his cottage on the edge of the village, local children "take their legs in terror." An intense anti-social behaviour gives Silas a sense of even a frightening character that the children spy on Silas, as if he were a circus freak and that Silas has a menacing glare to keep children away from his house. This only enhances Silas' isolation and denial to socialise with the members of the village ...read more.