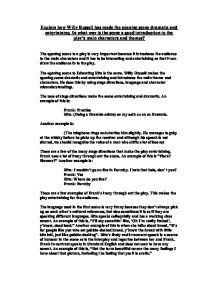 Explain how Willy Russell has made the opening scene dramatic and entertaining. In what way is the scene a good introduction to the play's main characters and themes?

Explain how Willy Russell has made the opening scene dramatic and entertaining. In what way is the scene a good introduction to the play's main characters and themes? The opening scene to a play is very important because it introduces the audience to the main characters and it has to be interesting and entertaining so that it can draw the audience in to the play. The opening scene to Educating Rita is the same. Willy Russell makes the opening scene dramatic and entertaining and introduces the main theme and characters. He does this by using stage directions, language and character misunderstandings. The uses of stage directions make the scene entertaining and dramatic. An example of this is: Frank: Promise Rita: (Doing a Brownie salute) on my oath as an ex Brownie. Another example is: (The telephone rings and startles him slightly. He manages to gulp at the whisky before he picks up the receiver and although his speech is not slurred, we should recognize the voice of a man who shifts a lot of booze) ...read more.

Rita's lively and irreverent speech is a source of humour in the scene as is the interplay and repartee between her and Frank. Frank in contrast speaks in Standard English and does not seen to have any accent. An example of this is, "But the term beautiful covers the many feelings I have about that picture, including the feeling that yes it is erotic." In the opening scene Willy Russell introduces us to the main characters. They are Frank and Rita who is also called Susan. Frank is a middle class teacher who has a deadpan sort of humour. He is introduced by searching for his drink, which is hidden behind Dickens in the book, shelve. He then gets a phone call from his girlfriend on the phone who he argues with because she is trying to make him go straight home instead of going to the pub after meeting Rita. When he puts the phone down he say's to him self "Yes, that's it you just go pop off and put your head in the oven". ...read more.

This all changes later on in the play. Frank is for more different. He is disillusioned and cynical at the start. At the start of the scene you can tell that Franks relationship with Julia will fail because of the way he treats her. The second theme that Willy Russell deals with is the clash of cultures. Rita comes from working class society, which she grows to despise later on in the play. Frank on the other hand inhabits a middle class academic world in which literature is seen to be important, even though he does not seem to care The third theme is education. At the beginning of the scene Rita is struggling to open the door. This can be interpreted as how Rita is struggling to change her life; it also shows to the audience just how hard it is to change your life if you don't get a good education when you have the chance. Rita says she wants to know everything. This shows how much she what's to change her life. The opening scene is a good introduction to the play and is dramatic and entertaining for an audience. ...read more.