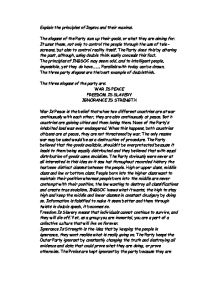 Explain the principles of Ingsoc and their maxims.

Explain the principles of Ingsoc and their maxims. The slogans of the Party sum up their goals, or what they are aiming for. It uses these, not only to control the people through the use of tele-screens, but also to control reality itself. The Party does this by altering the past, although, using double think easily conceals this fact. The principles of INGSOC may seem odd, and to intelligent people, impossible, yet they do have......... Parallels with today can be drawn. The three party slogans are the best example of doublethink. The three slogans of the party are: WAR IS PEACE FREEDOM IS SLAVERY IGNORANCE IS STRENGTH War Is Peace is the belief that when two different countries are at war continuously with each other, they are also continuously at peace. ...read more.

INGSOC knows what it wants, the high to stay high and keep the middle and lower classes in constant drudgery by doing so. Information is falsified to make it seem better and them through twists in double speak, it becomes so. Freedom Is Slavery means that individuals cannot continue to survive, and they will die off. Yet, as a group you are immortal, you are a part of a collective culture that will live on forever. Ignorance Is Strength is the idea that by keeping the people in ignorance, they wont realise what is really going on. The Party keeps the Outer Party ignorant by constantly changing the truth and destroying all evidence and data that could prove what they are doing, or prove otherwise. The Proles are kept ignorant by the party because they are incapable of intelligent thought, even if what was really going on was staring them in the face, even then they wouldn't realise what was actually going on. ...read more.

The worst thing possibly imaginable, and for Winston, this happens to be Rats. When the rats are released onto Winston, he finally betrays Julia. His love is finally betrayed. "Do it to Julia" he shouts. He has betrayed her. He is released from the Ministry of Love and is given a job as a nothing, he makes money doing something, which he has no idea what. At the end Winston is sitting in the Chestnut Tree Caf�, a newsflash comes on which tells how Oceania's borders are being threatened and Winston thinks up a plan of how Big Brother could outflank the enemy. He then discovers that Big Brother did exactly what he was thinking and Oceania is saved. Finally, the Party have achieved what they wanted, and Winston has become just another regular person, just like they wanted him to be, with no opinion of feelings towards anything. Finally, Winston truly loves Big Brother. ...read more.

This answer is a sound response to the proposed question and the candidate shows a well-supported understanding of both the novel and the Principles of Ingsoc. They shows an ability to take the mantra of the Party and elaborate on ...

This answer is a sound response to the proposed question and the candidate shows a well-supported understanding of both the novel and the Principles of Ingsoc. They shows an ability to take the mantra of the Party and elaborate on them, taking examples from the book in the case of "WAR IS PEACE", but not in either of the other two. I would argue that the two-line explanation of "FREEDOM IS SLAVERY" is simply not enough and neither is the still comparatively short "IGNORANCE IS STRENGTH". The second is the easiest to explain, because Winston defies this one himself, so it is quite unfortunate that the candidate didn't write about this mantra in detail, as the explanation of "WAR IS PEACE" is very good.

The Level of Explanation (this being a question primarily for explanation and description) is adequate, though there is not quite enough to properly score higher than a middle B grade for GCSE. This is because a lot of where the candidate appears to be showing extra knowledge, they are merely using examples sourced directly from the book, sometimes adopting whole sentences that Orwell writes (or at least writing with a strong syntactic parallel) and this limits the effectiveness of the answer, To improve, this candidate should look to ensure that everything they write is absolutely explicitly relating to the question at hand. The biggest mistake they make is to include the Principles of the Rebellion (the fake one that O'Brien is thought, at first, to be helming) and incorporating the belief about the class system. Whilst yes it is important to include as the Inner Party, Outer Party and the Proles are very segregated groups of people, the recognition of the aims of these classes is only ever identified in O'Brien's book and thus is not actually a mantra of the Party. Only information that pertains directly to what the question is proposing should be included and analysed.

The Quality of Written Communication here is excellent. Though predominantly written with short, simple sentences there is a good handling of English that avoids frequent misuses of grammar and incorrect spelling.