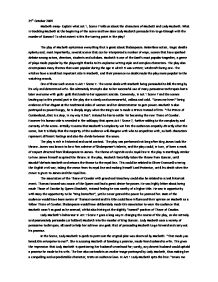 Explain what Act 1, Scene 7 tells us about the characters of Macbeth and Lady Macbeth. What is troubling Macbeth at the beginning of the scene and how does Lady Macbeth persuade him to go through with the murder of Duncan?

25th October 2009 Macbeth essay- Explain what Act 1, Scene 7 tells us about the characters of Macbeth and Lady Macbeth. What is troubling Macbeth at the beginning of the scene and how does Lady Macbeth persuade him to go through with the murder of Duncan? To what extent is this the turning point in the play? The play of Macbeth epitomises everything that is great about Shakespeare. Relentless action, tragic deaths aplenty and, most importantly, several scenes that can be interpreted a number of ways, scenes that have sparked debate among actors, directors, students and scholars. Macbeth is one of the Bard's most popular tragedies, a genre of plays made popular by the playwright thanks to his explosive writing style and complex characters. The play also encompasses many themes that were popular during the age in which it was written; witchcraft being one. The witches have a small but important role in Macbeth, and their presence no doubt made the play more popular to the watching crowds. One of these such scenes is Act 1 Scene 7. The scene deals with Macbeth being persuaded to kill the King by his wily and determined wife. She ultimately triumphs due to her successful use of many persuasive techniques but is later overcome with guilt- guilt that leads to her apparent suicide. Conversely, in Act 1 Scene 7 and the scenes leading up to this pivotal part in the play she is steely and unremorseful, callous and cold. "Unsex me here!" being evidence of her disgust at the traditional roles of women and her determination to gain power. Macbeth is also portrayed as power hungry, he is deeply angry when the King's son is made a Prince instead of him: "The Prince of Cumberland...that is a step, in my way it lies". Instead he has to settle for becoming the new Thane of Cawdor. However his human side is revealed in the soliloquy that opens Act 1 Scene 7, further adding to the complexity and curiosity of the scene. ...read more.

However I don't believe Shakespeare wanted the audience to react with humour to the statement. I believe he is trying to tell the audience that both sexes are equal- and not just equal in fairness. In some of his other plays the female characters prove themselves as equals by demonstrating their strong-wills or by proving themselves just as clever as their male compatriots. But here, Shakespeare is demonstrating that a women too can stoop too low levels usually only associated with men; women are equal, but that means they have the same faults men have. Flattery plays an important plan in Lady Macbeth's scheme. She proves this by saying to Macbeth: "(Do this) And be so much more the man;" Once again she is using her gender to convince Macbeth to go against his instinct. She is portraying herself as slightly weak and in need of a man, thus she convinces Macbeth that, if he kills Duncan, he will always be, in her eyes, so much more than a man- a great compliment to Macbeth. This appeals to Macbeth's masculinity; therefore he participates in the murder of Duncan, just to show Lady Macbeth he can provide for her. Despite my views that Lady Macbeth is a misunderstood character, some view her as totally evil. These people are quick too point out that she can be contradictory, a trait usually associated with the negative side of human behaviour. They also point out that Lady Macbeth manipulates both appearance and perception as evidenced by the line: "Look like th' innocent flower but be the serpent under t'." Here Lady Macbeth is instructing Macbeth to put across a false appearance, he should act nicely and humble when in Duncan's presence, all the while disguising his feelings of hatred and jealously. Lady Macbeth is being slightly contradictory here, she is instructing Macbeth to lie low, and to use cunning in his murder of Duncan whilst she has failed to see she can use her own femininity to her advantage. ...read more.

It was a common believe that all women should support their husbands, and that they should never voice their opinions. This is nearly exactly what Lady Macbeth does in the play. Some would argue that she does indeed voice her opinions but these lines could be viewed instead as lines of support from wife to husband- Lady Macbeth just wants her husband to do well. Normally, a character's soliloquy can be used to judge their feelings but in Lady Macbeth's two main soliloquy's she is thinking irrationally, in the first bitter and angry, in the second desolate and suicidal. How then, can these soliloquies be taken seriously? Lady Macbeth represents the oppression of women, viewed as a villain despite "doing her job". The fact that Lady Macbeth conquers Macbeth in the scene also makes Act 1 Scene 7 a very important scene. Shakespeare is showing his audience that femininity can humble masculinity and that, if the public aren't willing to treat both sexes in the same way, it should at least be women who are considered the superior race. His play wasn't merely written to entertain, it was also written to provide a medium in which Shakespeare could put across his statement: treat the sexes the same. Macbeth remains one of Shakespeare's best-loved plays and still pulls in the crowds to this day. Act 1 Scene 7 could be interpreted as the most important scene in the play, and most people conclude slightly different judgements- such is the depth and detail of the scene. In my eyes Lady Macbeth is misunderstood, not a villain but an ironic statement on the oppression of women. She carries out her roles as wife to Macbeth in perfect fashion- she supports him, doesn't offer her honest (and differing) opinion to Macbeth and also covers up for him, one example being when Macbeth begins to hallucinate at dinner. If only Lady Macbeth and the world around her adopted Shakespeare's advice, that being treat everyone the same and value everyone's opinion, the disastrous events of the play might never have occurred and that is precisely Shakespeare's point. ...read more.