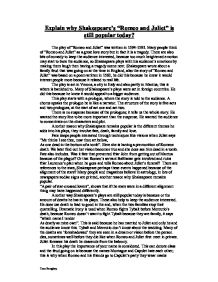 Explain why Shakespeare's "Romeo and Juliet" is still popular today? The play of "Romeo and Juliet" was written in 1594-1595. Many people think of "Romeo and Juliet" as a great love story but in fact it is a tragedy. There are also bits of comedy to keep the audience interested, because too much heightened emotion may start to bore the audience, so Shakespeare plays with his audience's emotions by making them laugh then having a tragedy scene next. Shakespeare wrote about a family feud that was going on at the time in England, also the story of "Romeo and Juliet" was based on a poem written in 1562, he did this because he knew it would interest people more because it related to real life. The play is set in Verona, a city in Italy and also partly in Mantua, this is where is banished to. Many of Shakespeare's plays were set in foreign countries. He did this because he knew it would appeal to a bigger audience. This play starts with a prologue, where the story is told to the audience. A chorus speaks the prologue he is like a narrator. The structure of the story is five acts and two prologues, at the start of act one and act two. There is no suspense because of the prologues; it tells us the whole story. ...read more.

their parents chose who they married and Romeo and Juliet's parents would never have agreed to there marriage because of the long standing feud between the families. The nurse help's a great deal with planning the wedding. She is like a mother to Juliet. She brought her up even breast-feeding her, she was a mother but her died so she breast feed Juliet. This has made Juliet and the nurse unbelievably close together. One of the best ways Shakespeare has kept his plays popular for over four hundred years is the different ways he shows love in his plays. There is infatuation where Romeo can not stop thinking of Rosaline at the start of the play, also there is s****l love between Romeo and Juliet this shows just how close they really are and how much they do love each other. There is more than just love because of gender there is Romeo's love for Mercutio as friends. When Mercutio is murdered Romeo cries then goes as far as taking Tybalts life as revenge for the death of his friend. There is parental love in this play; we know Juliet and her parents and Romeo and his parent's love for their next of kin because the parents of the two lovers are distraught at the end because of the loss of the children. ...read more.

This is one of Shakespeare's greatest scenes in the play from my point of view and is one of the main reasons that make me appreciate Shakespeare's genius with language. Shakespeare must still be popular today because the books of his plays are still selling. There have been two films made of "Romeo and Juliet", one by Franco Zeffirelli in 1968 set in Italy and a more modern film by Baz Luhrman in 1997. Baz Luhrmann's film is set in America, although the language is the same, the scenes are different. In parts it doesn't make sense where they tell someone to draw their sword and they reach for a gun. Also the modern film is a lot faster. They talk faster and the film flows faster. The old film by Franco Zeffirelli is slower and easier to follow. Also the language fits with their costumes and the scene around them. The film changes some senses like the scene where Romeo and Juliet die/ in the book Romeo is dead and later Juliet awakes beside his limp body. In the Baz Luhrmann's film just as Romeo drinks the poison Juliet wakes and for a short moment they see each other 'alive'. This is how Baz Luhrmann has kept the audience interested late in the film. I believe the main reason Shakespeare remains popular is because of the way he plays with people's emotions and the great story lines he wrote. Tom Boughey ...read more.