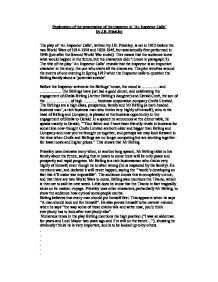 Exploration of the presentation of the inspector in 'An Inspector Calls' by J.B. Priestley The play of 'An Inspector Calls', written by J.B. Priestley, is set in 1912-before the two World Wars of 1914-1918 and 1939-1945, but was actually first performed in 1946 (just after the Second World War ended). This means that the audience knew what would happen in the future, but the characters didn't (more in paragraph 2). The title of the play 'An Inspector Calls' reveals that the inspector is an important character in the story, the one who starts all the drama etc. The plot revolves around the events of one evening in Spring 1912 when the Inspector calls to question the Birling family about a 'potential suicide'. Before the Inspector arrives at the Birlings' house, the mood is ............. and ................ The Birlings have just had a good dinner, and celebrating the engagement of Sheila Birling (Arthur Birling's daughter) and Gerald Croft, the son of the .................. ...read more.

Birling believes that every man should put himself first. This apparent when he says "A man should look out for himself". He also proves himself to be narrow-minded when he says "the way some of these cranks talk and write now, you'd think everybody has to look after everybody else". Numerous times in the play Birling mentions his high position ("I was an alderman for years-and Lord Mayor two years ago-and I'm still on the bench..."), showing he obviously thinks he is very important, and is to be looked up to by others. . . . . . . . . . . . . When the Inspector arrives a tense and heavy atmosphere falls over the house, and this tension gradually builds as the play progresses and the Birlings discover more and more about each other. The 'Inspector' (claims to be a police officer) claims to be investigating the suicide of a young woman named Eva Smith, who '"drank some disinfectant and died, after several hours of agony, tonight in the infirmary."' ...read more.

He backs up his actions by saying "If you don't come down sharply on some of these people, they'd soon be asking for the earth." The Inspector contradicts his view, saying "after all it's better to ask for the earth than to take it." Eric and Sheila agree with the Inspector, supporting the workers' cause ("Why shouldn't they try for higher wages?" "These girls aren't cheap labour-they're people"). The next person to be (interrogated?) questioned is Sheila; "a pretty girl in her early twenties, very pleased with life and rather excited." Initially she seems to still act slightly childish, na�ve and slightly immature, emphasized by her parents' patronizing attitude towards her, although she is an adult just engaged ("She's overexcited"). Throughout the play the parents often refer to both Sheila and Eric as 'the children'. S During this ordeal the family seem to be split in two- Sheila and Eric, and Mr and Mrs Birling. Gerald, though, is a bit undecided; not wanting to betray his class. ...read more.